The UESPWiki – Your source for The Elder Scrolls since 1995
< Online: Quests: Summerset / Side Quests
Jump to: navigation, search

Kinlady Helenaere of Sunhold needs my help to fight back against a Maormer raiding party and rescue her city. 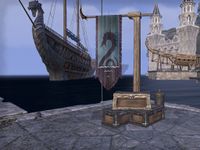 The closest objective is to destroy the invaders' supplies. The supplies are located on the docks, accessible from the paths by the entrance. Head south towards the sea and start burning Maormer Supplies, which are in trunks and crates along the docks. This task is simple, and can be done without alerting the Maormer if you're really careful.

When you find a group of prisoners, you will need to destroy their chains. You will release from two to three prisoners at a time in doing so.

Sunnawel is also being held in chains. Kill the Storm Sharks harassing her and destroy one of the chained posts holding her down. Destroying one of the electrified bindings will give her the wiggle room needed to break free of the other bindings, allowing her to fly off. Congratulations, you've unlocked the aid of a giant feathered monster that will pick off Maormer for you on occasion.

The next step is to find the Kinlady. You will be approached by Khavid, who informs you that the Kinlady has been captured by Admiral Viscarne. The Kinlady is being held captive at a courtyard in the northernmost section of the city, near Sunhold's group event. Kill the admiral, free the Kinlady and accept your reward for helping the people of Sunhold.

This Online-related article is a stub. You can help by expanding it.
Retrieved from "https://en.uesp.net/w/index.php?title=Online:Sunhold_Sundered&oldid=2035630"
Categories:
Hidden categories: