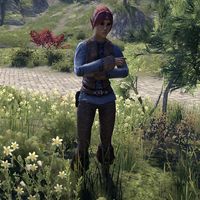 Miranrel is a Bosmer south of Gryphon Aerie. You'll find her off the main road to the King's Haven Pass Wayshrine at the Direnni Acropolis path intersection. She asks you to help find her lost friends in the aerie.

Approaching her, she can be heard muttering to herself: "Didn't those idiots ever learn how to run properly?"

Speak with her to start the quest.

"Whoa—hey! What are you doing in this neck of the woods?
Not that you don't have a right to be here, that is! It's just, well, a gryphon nesting ground doesn't tend to be the best place for a stroll."
If this place is so dangerous, what are you doing here?
"Me? Why, I just got a little lost, is all.
I would have left already, if not for my friends. We were separated, you see, running away from those damn beasts. I'm not much of a fighter, so I'm just hoping they'll make their way out."
I could search for them.
"Really? I have to warn you, the gryphons in there are quite nasty. They'd do anything to protect their nests from invaders.
But if you're willing, I'd be mighty grateful. Even pay you for your efforts!"
I'll search the gryphon nesting grounds and find your friends.

When spoken to after the quest has been acquired:

"If you find my companions, let them know to meet me by the wayshrine, right down the road. And don't worry, I won't run off before you get your reward."
How did you end up so close to a gryphon nesting ground?
"We were on our way to Cloudrest, but must have made a wrong turn. Somehow we ended up within this nesting ground. Of all the luck!
Soon as we realized where we were, a whole flight of gryphons came rampaging towards us. I barely escaped!"
And your companions?
"The way I see it, they're either dead or hiding. If they're dead, make sure to search their pockets, all right? I'd at least want something to bring back to their families."

When spoken to after rescuing her companions:

"Y'ffre be praised, I can't believe you were able to pull that off. You're something else.
And don't worry, Gwinolas told me about Aralem. It's a damn shame he had to die, but at least my other companions are safe."
I found this gryphon egg on Aralem's body.
"You did? Well, I'll be taking that. Wouldn't want it to go to waste, after all.
Thanks again for all you've done. These two would have never been able to make it out, if not for you. This reward isn't much, but it's the best I can do."

The quest can then be completed.

Speaking to Miranrel after the quest has been completed:

"We'll head to Cloudrest, soon as my companions have time to rest. I think we've got our bearings now."
I don't think you've been completely truthful about what happened here.
"What? I—I mean …. Oh, all right. After all, you did save these drag-heels.
We actually came here to collect some gryphon eggs. I thought we could just sneak in and out, but the damn creatures must have caught wind of us."
Why would you want gryphon eggs?
"Someone hired us to grab some, is all. Not sure why.
Gryphons aren't easy to come by though, outside of Summerset. Perhaps our buyer plans to sell the eggs somewhere off the island. A venture that is not, far as I know, entirely legal."
Is that why you lied to me?
"Of course. It's always a good practice to keep such transactions under wraps. For all I know, you'd have run off and told the Divine Prosecution.
I wouldn't go tattling now though. After all, you were the one who handed me the egg."