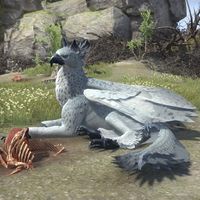 Nagravia is one of two hostile gryphons encountered at Gryphon Run. She is Haeliata's mate. 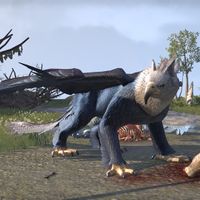 Haeliata and Nagravia have been targeted for execution by the Divine Prosecution as they have become a menace to the public. Gryphons don't usually seek out the flesh of mer, but Nagravia and her mate have developed a seemingly perverse appetite. They have taken to hunting people on the road and need to be put down for the safety of Summerset's citizens.

This Online-related article is a stub. You can help by expanding it.
Retrieved from "https://en.uesp.net/w/index.php?title=Online:Nagravia&oldid=1962216"
Categories:
Hidden categories: