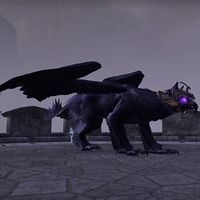 The Shade of Falarielle is a shadowy clone of the Welkynar gryphon Falarielle, created by Z'Maja. It will summoned after the Shade of Galenwe enters combat, who together serve as an optional boss, though defeating them will make the battle with Z'Maja easier.

Hoarfrost
The Shade of Falarielle will rear back onto her hind legs and release a raging, swirling hoarfrost. Hoarfrost inflicts players with a damage-over-time and snare effect. This effect is displayed as a white circle at the player's feet. Hoarfrost deals constant ice damage, but after seven seconds it can be discarded by pressing the synergy button. The discarded Hoarfrost will remain on the floor where another player must pick it up and repeat the process. After the third player has discarded Hoarfrost it will disappear from the arena for a short while. Failure to pick up the Hoarfrost effect will cause it to shoot ice projectiles that increase in strength the longer it is left unattended.
Hoarfrost Shard
The frost damage that affects players who aren't holding the Hoarfrost while the Hoarfrost is roaming.
Gryphon Claws
Falarielle's Shade will swipe her target with her claws when she is grounded.
Gryphon Bleed
This is more of a problem on Veteran difficulty. When the Shade of Falarielle light attacks you with her claws, she will apply a bleed DoT that stacks every time she light attacks you. She shares this ability with the other Gryphon Shades.
Take Flight
As the Shade of Falarielle is preparing to swap into "Flight Phase," a massive AOE will begin to spread on the ground beneath her, knocking back any players standing within. The tell for this ability is when she crouches, giving several preparatory flaps of her wings before swooping upwards.
Gusts of Wind
When Falarielle's Shade is airborne, she will dip down and swoop back up, whipping up small "tornadoes" in her passing. These gusts CC players that they hit.

This Online-related article is a stub. You can help by expanding it.
Retrieved from "https://en.uesp.net/w/index.php?title=Online:Shade_of_Falarielle&oldid=2192021"
Categories:
Hidden categories: