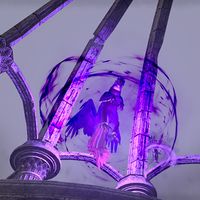 Falarielle and her rider, entrapped

Falarielle is a gryphon and the companion of Welkynar Galenwe. She possesses the ability to unleash powerful frost magic in the form of Hoarfrost. She and her mortal partner have been captured by the Sea Sload sorceress, Z'Maja.