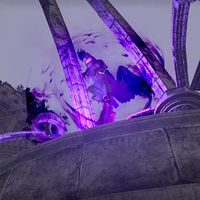 Belanaril is a gryphon and the companion of Welkynar Relequen. She is capable of unleashing powerful lightning magic in the form of Voltaic Overload. She and her mortal partner have been captured by the Sea Sload sorceress, Z'Maja.