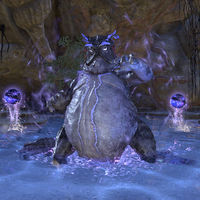 Sea Sload are a variant of Sload who hail from the undersea kingdom of Ul'vor Kus. Known to be even more reclusive than their Thrassian cousins, Sea Sload often tend to form cabals among themselves to achieve common goals, which then break up or reform as those goals change.

In addition to necromancy, the Sea Sload are also skilled in the arts of alchemy, shadow magic, and mind magic, as well as other arcane disciplines. Sea Sload utilize various deep sea creatures, such as the yaghra, as servants and soldiers.

Four Sea Sload formed an alliance during the Three Banners War. Calling themselves the "Abyssal Cabal", they partnered with the Court of Bedlam in order to sink the island of Summerset and reclaim it:

"Sea Sload are powerful, large, and revolting beings that use telepathy to speak. They are engorged, slug-like monstrosities, but their portly form belies immense magical prowess." —Prima guide description[1]:218
Pearlescence
Summons two pearlescent orbs; one near the Sea Sload, and one near a target. A Sload group boss may summon as many orbs as there are opposing players.
Mental Manipulation
Moves pearlescent orbs (Alchemical Globules), which explode if they strike a player target. Pearls moved by Mental Manipulation move quicker or slower depending on how far away the pearl is from where it is going.
Hallucinosis
The Sload creates a shield of psychic energy around itself. When the shield is attacked, it may release AoEs which snare and inflict Mind Magic damage to those who step in them. The AoEs also activate pearls, which summon Yaghra when they're hit by Hallucinosis.
Cognitive Dissonance
Summons two hydro-portals, one in front of the Sload and one at least 15 meters away, allowing them to teleport.
Mind Blast
A beam of energy channeled at their antennas that deals mind magic damage at one target and staggers them. Group boss Sea Sload can hit multiple targets with this ability. Being hit by this ability also makes you the prime target for nearby Yaghra.
Engorge the Horde
The Sload congeals a ball of energy, releasing it to target nearby Yaghra and applying a buff. It appears as a moderately sized AoE.
Ingurgitate
The Sload calls an orb to it and absorbs it, granting the Sload rapid health regeneration. Group boss Sea Sload can absorb multiple orbs simultaneously. Destroy as many orbs as you can find to prevent the Sload from healing. 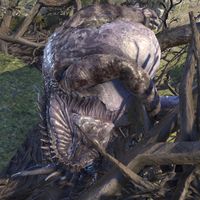 The dead Sea Sload; lunch for a Gryphon

K'Tora can be heard at Abyssal Geysers, as well as found in the following locations: