The Imperial Navy, also known as the Imperial Fleet[1], is the Empire's aquatic force, complementing the land-based Imperial Legion. It is active during both wartime and peacetime, dealing with provinces such as Summerset in various wars and dealing with pirates in peacetime. The Navy's home port is the city of Anvil.[2] The Imperial Navy also has an Imperial Naval Consortium, where many scholars work, with one known study there being vexillology.[3] 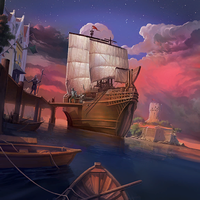 Circa 1E 1033, the pirate Red Bramman was infamous for raiding around Topal Bay, which in turn caused Empress Hestra to dispatch the Imperial Navy. After several unsuccessful battles the Navy discovered the pirate king's means of escaping capture: a narrow, winding river emptying into the Bay near Soulrest, the mouth of which was hidden by dense thickets of mangroves.[1] The Imperial Fleet tracked Bramman up the river east of Topal Bay, braving the thickets, pox-carrying insects, and the humidity, eventually finding and beheading Bramman in his bandit kingdom near what is now Blackrose. Once the Navy returned, the crew members reported the culture of Black Marsh for the first time in Imperial history.[4]

One of the Imperial Navy ships that tracked down Bramman was the Dominus Fatum, the former House Indoril flagship. Captured during the Battle of Tear Harbor during the War for Silyanorn, the ship was rechristened as the Dominus Fatum to commemorate the Imperial victory. During the pursuit for Red Bramman, the Dominus Fatum braved the uncharted rivers of Shadowfen to prevent his northward escape, which caused the ship to become mired in the swamp. However, it was closer to Blackrose than any other ship, and this ultimately allowed its crew to capture the pirate. The ship was still preserved atop a tree over 1000 years later circa 2E 582. While a Dunmer ship, the Dominus Fatum was typical in many ways to other First Empire ships, with a unique banner hanging suspended from a tall pole by a crossbar. The Dominus Fatum's banner, however, hung on a solid gold frame, a very rare privilege for Imperial Navy ships.[3]

The Imperial Navy also took part in the All Flags Navy in 1E 2260, a fleet assembled from all Tamriel to attack the Sload of Thras.[5]

During the Knahaten Flu, the Imperial Navy used warships to maintain order in the wake of the Flu that affected all of Tamriel. One known warship is the Bountiful Mara.[6]

In 2E 566, Emperor Leovic had the Navy patrol the Brena River and Strid River, both of which were crucial trade routes for the Empire. Prior to this numerous pirate clans had laid claim to both rivers, but the presence of the Imperial Navy ended this and allowed for goods-laden galleons to peacefully travel both rivers.[2]

In 2E 577 the Imperial Navy was dispatched to deal with Varen's Rebellion to the north and east of Anvil. Exploiting its absence from Anvil, the "Pirate Queen" Fortunata ap Dugal took advantage of the navy's absence to seize control of the city, disembarking sailors and pirate warriors who overpowered the Imperial Prefect's troops. Anvil thus fell under ap Dugal's control.[7] The Imperial Navy was subsequently absent during the Interregnum and thus unable to oppose the pirate fleet, some Anvil citizens believed that they would set their sights on other ports.[8]

Ships of the New West Navy during the Battle of Hunding Bay.

During the Tiber Wars, which took place in the second half of the last century of the Second Era, the Imperial Navy was most likely active in all of Tamriel due to the nature of the conflict. One known part of the Imperial Navy was the New West Navy, active in the Abecean Sea dealing with pirates, and in Hammerfell.[9] The New West Navy was first led by Admiral Vasi Hadrach until he was assassinated by a rebellious Reachman in a brothel in Daggerfall; he was thereafter replaced by Amiel Richton. Richton's distinguishing success in captaincy was the command of a squadron which participated in the Battle of the Bjoulsae, which saw Wayrest's naval power crushed in a surprise dawn attack. Richton was therefore and thereafter promoted to take Hadrach's place upon the latter's assassination. The new admiral's crowning achievement was when he led the New West Navy to victory over Prince A'tor's fleet in the Battle of Hunding Bay—largely due to help from the dragon Nafaalilargus. [10]

After Hammerfell, the Imperial Navy prepared its fleets in Skyrim, ready to take Morrowind. By that point it and the Legion were considered undefeatable, but Morrowind's swampy terrain did not favor the Navy's and Legion's coordination. This, however, was ultimately irrelevant as the Tribunal God Vivec appeared before Tiber Septim after several Empire-won battles, one of which laid waste to the city of Mournhold, to sign the Armistice.[11][12]

In 3E 110 the Maormer of Pyandonea waged war against the Altmer of Summerset in the War of the Isle. Emperor Antiochus Septim allied with the Kings of Summerset against the Maormeri King Orgnum, and provided Imperial support in the form of the Navy. The Navy thus worked alongside the royal navies of Summerset[13], and by their combined forces and the Psijic order Orgnum's forces were defeated.[14][15]

In 3E 249, the Camoran Usurper's invasion began, and the Imperial Navy took every ship—including impressed private ships—to fight the Usurper. Whilst the Navy was busy putting down the Usurper, pirates infested the Gold Coast, targeting supply ships that were heading to High Rock as the Navy couldn't defend them. due to fighting in High Rock. One group of pirates, under Torradan ap Dugal, became known as the Red Sabre. After the Usurper had been put down, the Empire placed a bounty of 40,000 Septims on ap Dugal, but nobody in Anvil would attempt to collect it as the city had become a den of thieves and sailors—all working for Dugal. Months after the Usurper's war had ended, Commodore Fasil Umbranox, fully resourced by the Empire, turned his attention to the Red Sabre. Under Umbranox, the Imperial Navy searched hundreds of islands in the Abecean for Dugal's flagship, the Black Flag. Crews were landed on each, and the pirates found thereupon were treated harshly. Pirates who surrendered were jailed; pirates who didn't were hung. It took Umbranox four years to find Dugal, with Umbranox constantly replacing lost ships and men. Eventually, Dugal attempted to deceive Umbranox with planted information to draw him out of Anvil; this distraction was to be used to capture Umbranox's ships in Anvil in the commodore's absence. The commodore, however, had anticipated this: he had men waiting for Dugal at Anvil Bay. The Imperial Navy set Anvil alight to keep Dugal and the Red Sabres from fleeing onto land, and so the main forces of both sides fought until only the flagships of both sides remained. Dugal eventually attempted to flee on his flagship, but battlemages stationed on Umbranox's brought a cliff down upon the Black Flag. Dugal was thus entombed within a cavern, and met his end therein. As a result of this victory, Umbranox was awarded Anvil, and his family ruled the city ever since.[16][17]

In 3E 271, a Far East Fleet was created for the preparation of the invasion of Akavir. The largest naval force assembled in Tamriel's history, it the Navy conquered the island of Roscrea in that very year. In 3E 276 they conquered the island of Cathnoquey, Yneslea in 3E 279, and Esroniet in 3E 284. With the fall of Black Harbor in Esroniet, Uriel V ordered extensive renovations to the port, which would serve as the launching point for the Navy and as the main supply source for the planned invasion of Akavir.[18][19]

With the coronation of Uriel Septim V in 3E 268, the Navy became part of his ambition to conquer. Roscrea's capture in 3E 271 was to be the first of several, with the islands of Cathnoquey, Yneslea, and Esroniet taken in 3E 276, 3E 279, and 3E 284 respectively. Uriel then began to assemble a naval force of incredible proportion in preparation for an invasion of Akavir. The Far East Fleet, based in Esroniet's Black Harbor, was said to be the most powerful in Tamrielic history.[19][20]

Between 3E 285 and 3E 286, naval expeditions were sent out to scout the sea lanes and coastlands of Akavir. Based on this scouting, the kingdom of the Tsaesci was picked as the invasion's initial target. When the fleet did arrive, it faced no naval opposition. The Fleet therefore simply dropped off the legions and sailed away to collect more soldiers and supplies. While it returned to Esroniet uneventfully, its departure from Black Harbor was delayed by unusual storms. A majority of the Battlemage Corps was thus assigned to the Fleet to combat the storms. The Far East Fleet's final action in the failed invasion of Akavir was the evacuation of the remnants of the Imperial Expeditionary Force.[19]