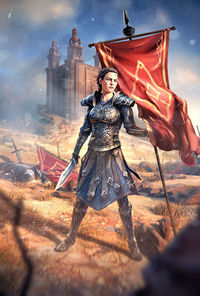 The Cygnus Irregulars were a garrison of the Imperial Legion under the command of Prefect Calo in 2E 582. The Irregulars were mainly military engineers, scouts, and trainers.[1]

During the Frostfall Coup, the Irregulars feigned loyalty to Euraxia Tharn due to being outnumbered by her Nibenese mercenaries.[1] However, they often sabotaged her plans as well as being outspoken on the invasion of Rimmen. Later in 2E 581, Prefect Calo anticipated that the Irregulars would eventually work alongside Lord Gharesh-ri against the Euraxians and so had been training them in preparation for joining their forces.[2]

In 2E 582, the Cygnus Irregulars were pardoned by Lord Gharesh-ri and formed an alliance with Queen Khamira against Euraxia Tharn. Following this, the Irregulars helped at the Dov-Vahl Shrine, standing guard against any Euraxian reinforcements whilst the Dragonhorn was recovered. The Irregulars assisted the Northern Elsweyr Defense Force at the Moon Gate of Anequina, holding off the Euraxians and dragons from Jode's Core.[3]

After the defeat of the Euraxians and dragons in Northern Elsweyr, the surviving Irregulars and Prefect Calo attended the royal coronation of Queen Khamira. She accepted the assistance of the Cygnus Irregulars to help Elsweyr as engineers and aide workers.[1]