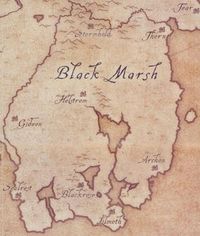 Soulrest is one of the eight major cities in the province of Black Marsh,[1] situated on the southwest coast next to the Topal Bay. The city is a quiet port-town that leaves the crashing sound of the sea behind its gates,[2] and its coastal access brings it a vast influx of foreign goods and aesthetics.[3]

Argonians have lived in the Soulrest region since at least ancient times, back when the wraxu birds were still alive and their likeness was etched in ancient xanmeers.[4] But the settlement has existed since at least 1E 1033, back when the notorious pirate-lord, Red Bramman was active. After every skirmish with Alessian Empire, Red Bramman would escape via a narrow, winding river near Soulrest, encased by a dense thicket of mangroves. The Imperial Navy eventually found the path and followed Bramman down the river until they reached the provincial heart and his bandit kingdom near Blackrose.[5]

Many years later, the Second Empire made their attempt to conquer Argonia and regions such as south-coastal Black Marsh were caught in the fray. General Regulus Sardecus led the second campaign over Black Marsh in the Blackwater War and in a controversial move, one of the General's trusted legates, Elissia Mallicius ordered her unit of sappers to burn a peat bog near Stormhold on Rain's Hand, 1E 2828. But unknown to them, the bog was connected to a vast underground network that stretches across the western portion of Black Marsh, from Stormhold to Soulrest and Gideon to the south. The toxicity of the Great Burn led to many severe casualties, not just from the Argonians or the Imperials,[6] but especially for wildlife like the wraxu, who went extinct.[4] At some point in time, there was a struggle for regional hegemony in Soulrest.[3]

During the Imperial Simulacrum in the late Third Era, the city-state of Soulrest was an active settlement. It was ruled by Queen Heciana and had a rivalry with Gideon.[2] Soulrest was neighbored by several settlements, one of them being Chasepoint to the east.[1] Sometime in 3E 427, the tribes of Black Marsh started a series of uprisings that destroyed plantations and mines in Soulrest, all the while halting exports of gold and timber. The Expeditionary Force was sent in by the Empire to quell these tribes.[7]