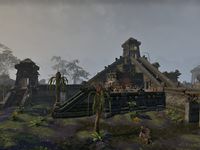 Xanmeers, also known as Stone-Nests, are stone temples built by ancient Argonian civilizations. The methods of constructing these expanses were lost long ago in a period known as Duskfall.[1] Due to their superb architectural design, many xanmeers still remain.

Prior to the calamity known as Duskfall, the Argonian people built towering stone citadels and ziggurats known as 'Xanmeers' all throughout Black Marsh as a testament to their might, built in such a way that they could stand for millennia, with many still intact to this day.[2] The knowledge of how these ancient Argonians managed to create such lasting, permanent structures on top of the ever-shifting marshes of Black Marsh has been lost ever since Duskfall, with even the Empire's attempts failing to produce more than half-sunken villas and decaying prisons.[3] Though one might expect modern Argonians to look back at this period of time longingly, many view their ancestors actions as misguided, and believe that they were built out of a fear of death or forgetting, and built them with the idea that they could reject change and endure forever.[4] Many xanmeers, such as the Teeth of Sithis or Xal Uthix, stood as monuments to the nature of Sithis the Destroyer, with the ancient Argonians seeking to appease them to be spared his wrath instead of accepting impermanence.[5] Priests of Sithis known as Nisswo, or 'Nothing-Talkers', once ruled these xanmeers as kings, regularly making mortal sacrifices to appease Sithis the Destroyer.[4]

Duskfall brought about a dramatic change, however. Though the exact events that transpired remain a mystery, what followed was a massive ideological shift from Argonian society. No longer did they fear the one truth of Sithis the Destroyer, but instead worshipped the many truths of Sithis the Changer, or 'Raj-Sithis'.[6] Nisswo no longer ruled as kings from stone citadels or instilled a singular version of Sithis to be feared, but instead served as humbled priests that spoke the many truths of Sithis[7], viewing him as a multifaceted being of change instead of a destroyer to be feared.[8]. As a result of this shift in mindset, Argonians no longer sought to build lasting structures to resist change like xanmeers, but to build impermanent homes that are ever shifting and changing, so that they can conquer their fear of death and decay, which they call 'Shunatei'.[4] Despite this, Argonians still view these structures with great reverence, watching over them and maintaining them so that the mistakes of the past would never be repeated.[9], while other tribes still reside within these ancient Xanmeers for fairly obvious reasons, as they serve as protection from a dangerous environment and hostile outsiders with their sturdy walls and ancient, mystical defenses.[10]

Xanmeers are massive, stepped pyramids that connect to one another by stone bridges. Their interiors are often deceptively large and mazelike, and house many traps and ancient artifacts to ward off intruders. Some are powered by Vakka Stones, stones infused with magic that are superficially similar to Welkynd Stones, and have magical defenses that have remained intact despite millennia of decay.[10] Inside each xanmeer was a room that housed the Hist of its respective tribe, keeping it safe from any outside invaders, albeit separating it from its tribe in the process.[11] Flint Vine is a type of hardy creeper that grows in caves or poorly-lit xanmeers. They are strong and sturdy enough to pull heavy objects and be fashioned into a rope-ladder.[12]

This Lore-related article is a stub. You can help by expanding it.
Retrieved from "https://en.uesp.net/w/index.php?title=Lore:Xanmeer&oldid=2461790"
Categories:
Hidden categories: