The Icereach Coven was a coven of witches active in the 6th century of the Second Era, primarily - though not only - composed of Reachfolk and a clan that serves under the leadership of the witches. They resided on Icereach, a frozen island in the Sea of Ghosts and served as advisors of the Emperor during the times of the Longhouse Dynasty and after the fall of the dynasty as allies of the the army of Vampires and Werewolves known as the Gray Host. 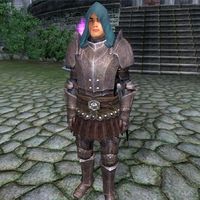 The Imperial Battlemages are a group of well trained war mages serving in the Imperial Legion. They had close ties to the Mages Guild before the Guild's dissolution. While the Guild had the authority to send battlemages onto the field, often to deal with violent rogue mages, the battlemages ultimately obeyed the orders of their superiors in the Legion.

The Imperial Cult is the main religion of the Empire. It can trace its origins back Saint Alessia's institution of worship of the Eight Divines as a synthesis between the Aldmeri gods and the Nordic pantheon. Strictly speaking, the Imperial Cult is the missionary arm of the religion which is present in provinces such as Morrowind; as the majority religion in Cyrodiil, it is more commonly known in that province simply as the Church or the Chapel. After the apotheosis of Tiber Septim, Imperials began to spread belief in the Nine Divines, incorporating worship of the Empire's god-hero Talos. However, the Third Empire was forced to sign the White-Gold Concordat in 4E 175, which outlawed Talos worship.

The Society has thrice been given the respected assignment of penning the Pocket Guide to the Empire, a broad overview of the history of the Tamrielic Empire. These guides, by definition of the Society, are to "paint a portrait of our known world at this moment in history for the edification of our readers [...] wide in scope".

The Society also published Gathering Force: Arms and Armor of Tamriel and The Improved Emperor's Guide to Tamriel in 2E 578, before the first pocket guide. An apparent branch of the Society, the Imperial Geographic Survey, published a census on the Daedra Lords around the same time as the third edition pocket guide was released.

In peacetime, the Legion serves primarily as a garrison force — manning forts, patrolling roads, and providing guardsmen for towns, cities, counties, and nobles. They are empowered to arrest criminals and seize their property, among other things. In wartime, the Legion's responsibilities and powers are greatly increased. During conflicts, the Legion serves as an invading and occupying force, overwhelming opposition with numerical superiority and strict economy of force. The aquatic equivalent of the Imperial Legion is the Imperial Navy, with the two often overlapping.

The Imperial Navy, also known as the Imperial Fleet, is the Empire's aquatic force, complementing the land-based Imperial Legion. It is active during both wartime and peacetime, dealing with provinces such as Summerset in various wars and dealing with pirates in peacetime. The Navy's home port is the city of Anvil. The Imperial Navy also has an Imperial Naval Consortium, where many scholars work, with one known study there being vexillology.

The Imperial Saints are pious individuals venerated by the Church, the majority religion among Imperials. Devotions are often made to them as a group, known collectively as the Communion of Saints.

Many saints are historical figures who continue to be revered long after death. The Church also venerates Living Saints, individuals who have received a calling to live by the commands of their chosen Divine as an example to others. It is believed that saints are blessed by the Divines with a second sight and that they do not view the world as other mortals do. Saints are buried in the graves of Green Emperor Way among other important figures in the Empire.

The practice of saint-eating was popular in the First Era before it was banned at some point prior to 1E 2877. This involved the disinterring of a saint's body for use as an ingredient in the preparation of food. However, apocryphal accounts suggest the practice did not immediately cease. An ancient text called the "Scroll of Precursor Saints" was supposedly discovered by Abnur Tharn in the vaults of the White-Gold Tower in 2E 541.

Iron Orcs, also known as the Osh Ornim, are an isolated Orcish civilization native to the Dragontail Mountains of Craglorn. They are known for their stone worship and their savage brutality, and are based in the Nordic ruins of the Valley of Scars. They tame Welwas and Trolls as war beasts, and primarily use iron arms and armor. They are culturally separate from other Orcs, and possess their own language.

The Iron Wheel was an organisation of bailiffs headquartered in Taneth during the Second Era. Originating from the Taneth branch of the Bailiffs Guild, when it and the rest of the guild collapsed following Imperial unrest, an inspector named Rhanbiq argued to retain the guild's former structure within the newly formed Iron Wheel. Despite the idealism of some of their members, the Iron Wheel had a reputation for zealotry and brutality.

The Wheel earned income by transporting prisoners to Taneth and transferring them into the custody of either the Taneth guard captain or an Iron Wheel bailiff to be held until trial. The Iron Wheel received payment upon delivering the prisoner, and the funds were used for the transport of personnel and supplies. Additionally, officers could officiate weddings. Members of the Iron Wheel did not make all of their own equipment, and at least some of their weapons and armor were supplied by the Merchant Lord Orahan at-Addin.

In 2E 582, the Iron Wheel was hired by Lady Magnifica Falorah of Taneth, who requested its aid in recovering her dowry, which had been stolen from the al-Danobia family tomb. Led by Chief Inspector Rhanbiq, the Iron Wheel contingent on Hew's Bane set up headquarters in No Shira Citadel and carried out investigations throughout Abah's Landing. Rhanbiq suspected the Thieves Guild, due to a failed previous heist, and proceeded to try and hunt them down.

The presence of the Iron Wheel caused some consternation for the merchant lords of Abah's Landing who saw the Iron Wheel as an occupying force prior to Taneth's conquest of Hew's Bane. Former guildmaster Nicolas, who created the identity of a merchant lord named Cosh, had stolen the dowry and was to marry Magnifica Falorah, which afforded him an immense amount of power once the Iron Wheel returned home.

With Magnifica Falorah no longer funding them, the Iron Wheel gradually returned to Taneth, having lost a number of prisoners and seized contraband and potentially even the very money to ship those remaining home.