The UESPWiki – Your source for The Elder Scrolls since 1995
< Lore: People: N(Redirected from Lore:Nafaalilargus)
Jump to: navigation, search

"While my brothers were slain or locked away, I have been free. I know when to fight, when to fly, when to look for allies. And so I stand before you, nikrent. Unbroken."

Nahfahlaar (meaning Fury-For-Water in the Dragon Language),[1] also known as Nafaalilargus[2][3] (sometimes spelled Nafalilargus[4] or N'falilaargas[5]), was a red dragon who often allied with mortals for his own protection. He acknowledged that dragons are bound by Fenjuntiid, the will of Akatosh, meaning that it is in a dragon's nature to pursue domination. However, he was willing to ally himself with select mortals in order to bide time and ensure his presence for events that may require his intervention.[6] In more ancient times, he allied with the Dragonguard and Pride of Alkosh to defeat his archenemy, Laatvulon. He took a liking to Ja'darri, a member of the Pride, being remembered in the legends of the moon priests as the Red Beast.[7] He would later go on to serve as the proud soldier of Tiber Septim, before eventually being killed at the hands of Cyrus.[4]

Nahfahlaar's early history is shrouded in mystery, but it is clear that he made powerful enemies amongst his fellow dragons. In particular, Laatvulon, the black beast, was his most ancient rival. To defend himself from Laatvulon, Nahfahlaar forged an alliance with the Dragonguard, despite the group's history of animosity towards dragons. Nahfahlaar granted his horn as a boon to one amongst the Dragonguard's ranks, the Khajiiti heroine known as Ja'darri. His horn would eventually become known as the Horn of Ja'darri and was recognized as one of the most powerful of Dragonhorns, tools that emit a sound capable of incapacitating dragons. The Dragonguard managed to seal Laatvulon away, but at the cost of Ja'darri's life, leaving Nahfahlaar with feelings of guilt over her death. Prior to her death, Ja'darri asked Nahfahlaar to empower the Mask of Alkosh, but he refused. Thus, this powerful tool was rendered unusable.[6]

Over the years, Nahfahlaar would continue to forge alliances with mortals who could protect him from death, but the Dragonguard no longer considered him an ally. After Ja'darri, his last known mortal protector was King Casimir II of Wayrest. The Dragonguard learned of this and successfully ended the alliance in 2E 369, but Nahfahlaar managed to escape. Following this event, his location was unknown[8] until over 200 years later in the Second Era. 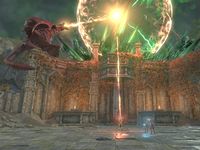 During the Alliance War, Abnur Tharn, the Imperial Battlemage, inadvertently released the seal that had trapped a rage of dragons within the confines of the Halls of Colossus. This colossal mistake inspired Laatvulon and many other dragons to come out of hiding. Laatvulon sought to carry out his master Kaalgrontiid's plan of bringing on the Dark Aeon, intending for Kaalgrontiid to become Akatosh's equal. To this end, Laatvulon created a Khajiiti dragon cult, the New Moon Cult, whose ranks were bolstered by many of the vulnerable Khajiit from the region, such as those who were affected by the Knahaten Flu. Nahfahlaar dueled Laatvulon near the city of Senchal in southern Elsweyr, but was overpowered due to Laatvulon's newfound power. Taking refuge in Tideholm, he was encountered by the Dragonguard, having been recently reformed by the Redguard Blademaster Sai Sahan. Seeing that Nahfahlaar meant no harm, an alliance was forged once again with former foes and allies, one in which Nahfahlaar served as a valuable asset. This alliance led to victory, and Laatvulon, the Demon from the East, was slain.[6] After this, he gifted the one he called "Ahkahtuz" a blade made from his own talon.[9]

Nahfahlaar subsequently aided the Dragonguard in defeating Kaalgrontiid and the remnants of the New Moon Cult. Kaalgrontiid planned to siphon the energy he obtained from Jode's Core through a giant cluster of Aeonstone, hoping that he would become empowered. To prevent anyone from disrupting his plans, he utilized the energy of the Aeonstone to create an aegis, a massive and impenetrable ward, around the ancient fortress of Dragonhold. Through the combined efforts of Nahfahlaar, the Dragonguard, and Queen Khamira's forces, Kaalgrontiid was slain. However, the Dark Aeon became unstable as a result of Kaalgrontiid's machinations and threatened to destroy the entire continent of Tamriel. It required the combined power of Abnur Tharn and Nahfahlaar to prevent the Aeonstone from affecting the area outside of Dragonhold. Nahfahlaar and Abnur were successful, but this resulted in the disappearance and possible death of Abnur. After putting a stop to the rage of dragons, Nahfahlaar sought out another place to wait until his intervention became necessary once again.[6]

The Battle of Hunding Bay[edit] 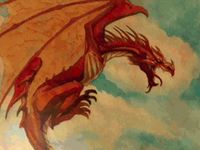 Nafaalilargus at the Battle of Hunding Bay

"I am Tiber Septim's proud soldier, loyal vassal, a jewel of the crown. It's not my fault I have to keep company with the Governor."

Towards the end of the Second Era, Nahfahlaar, now choosing to style himself as Nafaalilargus, started working as a mercenary dragon in the employ of Tiber Septim during his conquest of Tamriel. He was a proud soldier and a loyal vassal, causing him to be considered "a jewel of the Imperial crown".[10] During the Battle of Hunding Bay, the dragon was called in to help defeat the Crowns of Hammerfell. He sank Prince A'tor's ship with a single fiery breath after the prince had been struck down by a poisoned arrow, thus ensuring that A'tor's wizard could not attempt to expunge the poison.[4] Nafaalilargus was then put under the command of Lord Amiel Richton, a man who had been named the provisional governor of Stros M'Kai.[4] He was assigned to guard the soul gem of Prince A'tor, which was locked away in the treasuries beneath the island's palace. He coveted gold and was paid large amounts for his service.[10] The dragon was slain in 2E 864 by Cyrus the Redguard, while confined to a tight space in the Stos M'Kai treasure vaults. Cyrus employed tactics of the Argonian villagers of Noota Nara[11] by dipping his sword in dragonfire and piercing Nafaalilargus' hide, dealing a killing blow.[12][UOL 1] Cyrus then stole back the soul gem, and Richton was informed by Dram of the dragon's death.[12] His death weakened the Imperial presence on the island considerably. However, due to the immortal nature of dragon souls, Nafaalilargus isn't truly dead and could be raised again.[13][14]

Although its popularity faded as dragons began to disappear from Tamriel, a ballad concerning Tiber Septim and Nafaalilargus was still being recited in Skyrim circa 4E 201.[UOL 2]