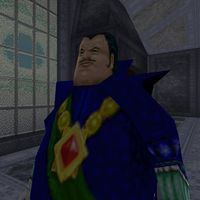 Amiel Richton is the Imperial Provisional Governor of Stros M'Kai. He resides in the Palace, the former home of Prince A'tor, and is often accompanied by Dram, his bodyguard and loyal servant. Richton is generally disliked by his new subjects, largely because he was responsible for the death of their Prince and the occupation and partial destruction of their city, along with smaller issues like his new taxes and refusal to let almost anyone in the Palace.

You first meet him when you enter the Palace to deliver an amulet from N'Gasta. N'Gasta says it is a gift to thank the Governor for his "generous" killing (therefore capturing souls in the necromancer's soul snare) and his policy of not intervening in the necromancer's activities. Richton is quick to dismiss Cyrus as a courier, and is surprised when it turns into a violent confrontation.

He later appears in several cutscenes, but you do not see him face to face again until the final battle of the game, during the quest Raze the Palace. Cyrus is determined to kill him and take back Stros M'Kai for the Redguards. He is one of your most difficult opponents, with 250 health and attacks that deal 10 damage, or 20 for a less common spin attack. Once his health goes to 0, the final cutscene plays. He feigns surrender, while Dram sneaks up and holds a dagger to Cyrus' throat. What he did not realize is that Cyrus' sword is enchanted with A'tor's soul; the sword rises on its own to strike down both Richton and Dram. Richton's airship crashes to the ground with him aboard.

Amiel Richton has been a faithful servant of the Empire for most of his life. Indeed, like Tiber Septim, he began his service under Cuhlecain, the so-called "Emperor Zero", who laid the foundation for the restoration of the Empire by unifying Cyrodiil for the first time since the fall of the old Cyrodilic Empire. The Richtons are a minor noble family from the Colovian West, near the Strid, which supported Cuhlecain when he began his bid for the Dragon Throne. Amiel Richton distinguished himself early on as a captain in the fledgling New West Navy during the campaign against the pirates of the Abecean Sea.

Richton rose quickly through the ranks, commanding a squadron in the Battle of the Bjoulsae where Wayrest's naval power was crushed in a surprise dawn attack. He succeeded Vasi Hadrach as Admiral upon that officer's assassination at the hands of rebel Reachmen in a brothel in Daggerfall. His crowning achievement came during the invasion of Hammerfell, where he led the New West Navy to victory over Prince A'tor's fleet in the Battle of Hunding Bay.

Following the Imperial conquest of Hammerfell, Tiber Septim appointed Lord Richton as Provisional Governor of Stros M'kai, which became one of the chief supply ports of the New West Navy. His orders are to clear the waters of pirates, a job for which he has shown great aptitude in the past, and to guard the strategic Cape of the Blue Divide against the fleets of the hostile Aldmeri Dominion to the south.

Delivery Scene
Richton allows Cyrus to deliver an amulet to one of his guards, but is instead interrogated about his knowledge of the Redguard's sister. He brings up the Restless League but denies familiarity with Iszara in particular, giving the impression that he knows more. Despite Cyrus' attempts to continue the conversation, he dismisses the courier. This forces Cyrus to threaten him, and Richton calls for his arrest. Watching the bloodshed that follows, Richton admires Cyrus' abilities but nevertheless orders Dram to perform a summary execution. Dram decides instead to question Cyrus in the Catacombs first and casts a spell to knock him out.
Escape Scene
A guard informs the governor of Cyrus' escape from the Catacombs. Richton is shocked; he doubles the guard and increases patrols so that he can recapture the traitorous Redguard, who he is developing a grudge against.
Dragon is Dead
Again, Richton is informed of Cyrus' deeds, this time his slaying of Nafaalilargus, the governor's dragon soldier and guardian of the treasure vaults. He questions Dram's ability to recapture the Redguard, who gives some good news: the location of the Restless League's hideout has been discovered from a prisoner. The governor authorizes an attack as soon as an assault party can be assembled.
Palace Scene
Hearing the League attack the harbor, Richton tells his guards to target Cyrus, cancels the attack on the League hideout, and prepares to board the Dwemer airship he found in the ruins. His plan is to retreat and let the Redguards have their day, while he gathers a large force on the mainland to recapture the island.
Ending
Following a duel between skilled swordsman, Cyrus gains the upper hand and forces Richton to surrender. The governor, hearing that Cyrus is going to kill him anyway, brings up the Rules of Engagement. This does little to sway Cyrus, so he brings up money (a phrase first uttered by Cyrus himself) and Redguard honor in not killing unarmed men. Turning away, he declares he is now under the Redguard's protection, congratulates his skill and victory. All this talk is to distract Cyrus from Dram, who sneaks up on Cyrus with a knife held at his throat. Richton states that the Rules of Engagement apply only to gentlemen, not traitors, and sentences him once again to summary execution. As Cyrus gives what appear to be his last words, the soul sword rises up and kills both Dram and Richton.

* Not heard because he does not actually die during combat.