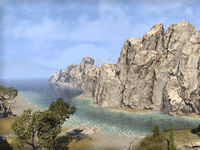 The Brena River is a fairly short, steep-banked river that flows into the Abecean Sea just south of the city of Rihad. The main branch rises in the Colovian Highlands and forms part of the border between Hammerfell and Cyrodiil, flowing westward along the northern edge of the Gold Coast. It is joined by another branch from within Hammerfell at a point on the border roughly north of Anvil. The Brena is an important trade route to the interior of the continent, and has occasionally been preyed upon by pirates.[1]

The Ayleid complex of Varlaisvea lies at the mouth of the Brena, on the Hammerfell side of the border.[2]