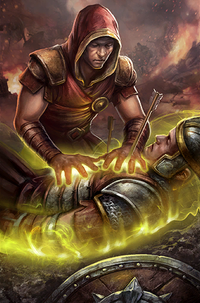 The Restoration discipline is the mastery of the spell effects of the College of Restoration, but it is not considered to be one of the "great schools" by the Mages Guild.[1] Restoration spells heal, restore, and fortify the body's attributes and abilities, cure disease, and protect it from other malign influences. The primary spells of this college heal wounds, cure disease, and restore lost vitality, but can also augment strength, endurance, intelligence, agility, and other bodily attributes. Absorption skills are also sometimes considered part of this college, although they may also be classed as Mysticism magic.

Despite the incredible utility of Restoration spells, knowledge of them seems to have formed more recently those of other schools: as late as the Second Era, even spells to cure disease seem to have been rarities.[2] In 3E 431, the Council of Mages decided that Restoration magic in Cyrodiil was to become the responsibility of the guildhall in the town of Anvil.[1] Because of the benevolent nature of this school, Restoration magic is very popular among religious workers.