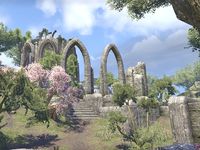 Tanzelwil, built by the Ancients

The Ancients are the ancestors of the Altmer of Auridon, the second largest island in the Summerset Isles archipelago.[1] They are responsible for the various limestone ruins that dot the island. The term is used by the natives to refer to both the early Aldmer and more recent Altmer ancestors.

The ruins of the Ancients are similar in style to the Ayleid ruins found on mainland Tamriel. However, Altmer architecture is cleaner and more direct, with less baroque ornamentation than that of the Ayleids.[2] Aside from their shared ancestry, the reason for this similarity is due to Altmeri propensity for refinement over innovation, and a resistance to large-scale change.[3] As well as Dawn Era Welkynd Stones, these ruins also contain Malondo and Culanda Stones, modern inventions of the Altmer[4] which were not utilized by the Ayleids.[UOL 1] The Ancients are also known to have harnessed the power of Meteoric Iron to create Aetherial Wells, magical relics similar to the Ayleid Wells found on the continent.[5][6]

The ruins of Torinaan are named after High Lord Torinaan, an early Aldmer settler from Aldmeris, and are an apparent example of Aldmer ruins. Tanzelwil and Castle Rilis, on the other hand, serve as mausoleums for modern Altmer.[2] Other ruins on the island include Ezduiin, the Buraniim sea-complex, Quendeluun, and the Eye of the Ancients.[7]

The term "Ancients" is also sometimes used to refer to the Ayleids on mainland Tamriel.[8]