The Kragen Clan was a group of Dwemer that was active during the First Era, throughout the Reach of Skyrim and even the Dragon's Teeth Mountains of Hammerfell. This clan of Dwemer are well-known for being the pioneers of Aetherium extraction, as well as, the leader of an alliance of four cities that mined and researched the luminescent material.[1] In the years following this, they founded the city-state of Arkngthamz-Phng,[2] where they established a mining colony of mithril and gold.[3]

The Kragen Clan were originally from Morrowind, like many other Dwemer. In 1E 416, the leader of the Dwarves, Dumac Dwarfking had thwarted the Nordic invaders out of Morrowind, alongside the Hortator of the Chimer, Indoril Nerevar. The two later created the First Council, an alliance between their two races. But there were some groups that opposed this relationship, namely the Rourken Clan of Dwarves. This clan left the province, seeking to build their own empire, in what was now Hammerfell. But in their wake, the Kragen Clan followed, leaving their homeland for the land of their former enemies, the kingdom of Skyrim. They built their stronghold in the Reach, and it became the city-state of Arkngthamz.[2] 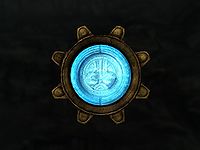 Arkngthamz was a great research center for Aetherium, a rare blue material that possessed immeasurable power. The Kragen Clan formed an alliance with four other cities present in the province (Bthar-Zel, Mzulft, and Raldbthar), and were responsible extraction, processing, and research. These great powers later built the Aetherium Forge, creating powerful artifacts with strong enchantments. However, this alliance quickly fell apart, and each of these cities made attempts to claim the forge, but none were successful, as their civil war made them weak and susceptible for High King Gellir's later conquest.[1] It is because of this, the Kragen Clan abandoned their exploits in Arkngthamz and moved further west into the Dragon's Teeth Mountains. Here they built Arkngthamz-Phng, which flourished despite the wild country the region is known for, and it eventually became the capital of the Kragen Clan.[2]

Arkngthamz-Phng resembled a large castle, with narrow towers and arched bridges. The upper level of the city was built over the actual mines, which excavated mithril and gold, both of which are of value. They were even in possession of an abundance of wealth,[3] and rivaled the splendor of Dumac's kingdom.[4] However, the city's prosperity ended with the arrival of Thurvokun, the Dragon of Scalecaller Peak. The Dragon had invaded Arkngthamz-Phng and driven the Kragen out of their home, taking it as his own lair.[5] What became of the Kragen Clan is unknown, but as many know, the Dwemer went extinct in 1E 700, coinciding with the War of the First Council. Thurvokun stayed in the dwarven city, and it later became known as Fang Lair.[2]