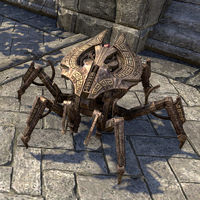 Dwarven Spiders (also known as Centurion Spiders) are small constructs resembling spiders that are very common in Dwemer ruins. They can often be found scuttling around ruins, sometimes repairing things.[1] They attack intruders using blasts of lightning[2], or by emitting poisonous gases from a sack.[3] Swarming spiders are present in some ruins, where they burst out of pressure vaults to attack intruders. Giant Dwarven spiders are very powerful and hard to come across.

Larger models were designed by the Dwemer for transportation purposes.