The UESPWiki – Your source for The Elder Scrolls since 1995
< Lore: Minerals: Metals
Jump to: navigation, search 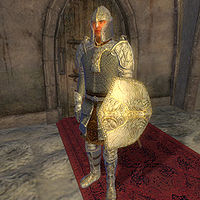 Mithril is an elusive and relatively scarce metallic material, known for being light and rather valuable, likely due to its rarity.[1] It comes in two different colors, in place such as Cyrodiil it comes in a shiny silver color,[2] while in the provinces of Hammerfell and High Rock, it is seen in navy-blue.[3] When broken, it can easily be melded together when heated up, unlike chainmail.[4] The only known veins of mithril can be found in the Dragon's Teeth Mountains, where the Kragen Clan harvested the material as one of their main resources, but whether it has been exhausted is unknown.[1]

The two distinctions of mithril go way beyond their color and location. In Cyrodiil, it is made into light armor and is considered stronger than typical leather and chainmail, but weaker than moonstone (the material of elven armor) and malachite.[2][5] Whereas the navy-blue variant is stronger than dwarven metal and moonstone, but weaker than adamantium and ebony.[3] Mithril armor is lighter than typical Orcish Armor, but is much more resilient.[6] The Battlespire used mithril armor that is as strong as the latter variant, although it is considered medium armor instead.[7] In ancient times, mithril was in constant use by smithies across Tamriel to craft special arms and armor, but it was reportedly extinct by 2E 582,[8] however it had resurfaced sometime later and it had appeared abundantly in the late-Third Era, in the Iliac Bay and Cyrodiil.[2][3] Lord's Mail, the plated cuirass of Morihaus is known to contain mithril in some degree.[9]