The UESPWiki – Your source for The Elder Scrolls since 1995
< Lore: Minerals: Metals / Alchemy: A
Jump to: navigation, search 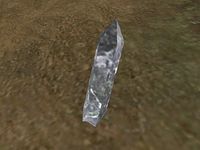 A shard of adamantium ore

Adamantium (also called Adamantine) is a rare, lustrous silvery metal used for making valuable armor and weapons. The ore is very heavy and can be used in alchemy.[1] Adamantium armor can appear as either a high quality heavy weight armor or medium weight armor. It is above the quality of Mithril[2] or Orichalcum,[1] but is inferior to Stalhrim[1] and Ebony.[2] The armor has a high potential for enchantment.[1] Adamantium weapons can harm magical creatures that resist normal weapons.[2]

The Adamantine Tower and Adamantium Helm of Tohan are made from the metal, as their names would imply. Chrysamere is also made of adamantium. Small deposits of Adamantium can be found in the ruins of Old Mournhold.[3]