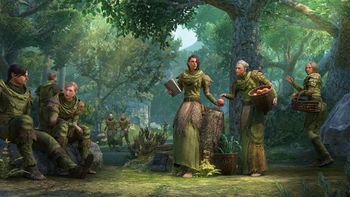 Druids of the Stonelore Circle

Druids (also known as vinebeards),[1] are practitioners of Y'ffre's True Way (or Druidism),[UOL 1][UOL 2] in which one is to lead a life connecting with and valuing the natural world.[2] The eponymous god takes the forefront of their faith, with some reverence also being shown to the stars.[3] Druids believe that Man and Mer were not meant to separate themselves from nature, as through it, one can rejuvenate and enjoy Y'ffre's bounty.[4][5] Druids have little interest in the quarrels of monarchies, often leading many to believe that they are pacifists. They however are not afraid to put up a fight, as violence and death are natural.[5] As champions of nature, druids steward its growth and defend their ancient sites from the cruelty of civilization.[6]

While the druids of old were a united entity, modern druids organize themselves into fellowships referred to as druidic circles. Each circle interprets Y'ffres will differently, while druids within the same circle share the same traditions and objectives. Druidic circles vary in their attitudes towards outsiders, with the Stonelore being welcoming, and the Eldertide being xenophobic.[5] As of 2E 282, aside from the three major druidic circles active in the Systres, there were also numerous smaller circles devoted to communing with nature.[7]

Druids are speculated as being a possible origin for the Soulrazer Knights, as they are often seen protecting sacred sites.[8] The Eldertide Circle are able to create the Reefborn, creatures of coral that mimic Nirn's creatures, a process that requires living sacrifices.[9] It is unknown if the Eldertide are also responsible for Reefborn that are present in other islands found in the Abecean Sea.[10]

Spriggan's Veils are branches that are sometimes shed by spriggans, which are believed to have symbolic meaning in druidic practices.[11]

Certain aspects of the True Way share similarities with the religious practices of the Reachmen.[12][13]

The Nedic precursors to the Bretons,[14] the Druids of Galen, survived in ancient High Rock by tapping into, nurturing, and terraforming nature.[3] They inhabited the province around ME 1000, predating Ysgramor by centuries.[15] Before these Nedes arrived in High Rock, the Aldmer were settled in the province sparsely and in very specific locations, the most successful being Clan Direnni,[16] who came to the province from the Summerset Isles in the Middle Merethic Era.[17][18] The Nedes and Aldmer intermingled,[19] producing the Breton race by 1E 20.[20]

The Bretons would begin to split into three groups due to the rising Direnni Hegemony. Sisterhoods repulsed by the Direnni became the Wyrd Covens when they retreated away from civilization, and embraced the more primal aspects of nature. The final split came from the Druids themselves around 1E 330, when two major powers vowed for control of High Rock. The Direnni Hegemony did not take kindly to the attempts for druidic governance of the province, and the Alessian Order persecuted them as they deviated from their religion. Following the guidance of a song or an Elder Scroll, the druids split from their mainland brethren and journeyed into the Systres,[21] and a few remained on the mainland.[5] Some druids seek to restore the soul of Bretondom by returning their city-dwelling brethren back to their Druidic roots, as they are prone to destroying nature, as well as causing bloodshed through wars. The Wyrd Covens however would remain distant, seldom acknowledging their shared heritage, and would come to see the Druids as nothing more than "barons in ivy robes".[3] 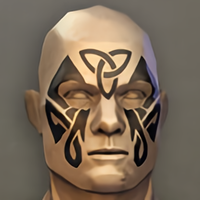 When the Druids of Galen arrived to the Systres, the Draoife terraformed a barren volcanic island into a lush and verdant volcanic paradise and named it Y'ffelon. The druids then swiftly expanded across the archipelago into the three other islands,[22] sprouting life where it was once barren.[21] The dissolution of the Druids of Galen was brought about with the event known as the "three mornings of sail", when priest-navigators set out to sea on enchanted vessels outside the archipelago. Their outside experiences and their interactions with different races resulted in three sects developing, each with their own interpretation of Y'ffre's will; the Stonelore, Eldertide, and Firesong Circles.[5][21] No longer bound to a line of druidic kings,[6] their symbology disappeared almost overnight.[23] Despite their separation, to symbolize their unity matters more and that they share the same goals, the druidic circles came to shaping knot-work into a triquetra,[24] a symbol that would become adopted by civilized Bretons.[25]

Eventually, the differences in beliefs of the three major druidic circles nearly led to conflict. This however was stopped by the appearance of a common enemy, the Sinistral Elves, who arrived at High Isle to flee the latest wave of Yokudan immigrants. Their invasion was temporarily halted when Y'ffelon's volcano of Mount Firesong erupted somewhere around 1E 668. Regardless, the Sinistral Elves took over the Systres, and the druidic circles were forced into hiding. With the coming of the Ra Gada in 1E 785, what remained of the Elves were purged, and the Yokudans quickly left the island to go eastward, to seek glory in Hammerfell. In the end, only the druids were remained, a mere shell of what they once were.[26]

The Stonelore druids who inhabit Systres investigated and attempted to shut down volatile volcanic fissures that have begun to plague the islands of the Systres circa 2E 582 [27] Around this time, the Mages Guild sought to research druidic magic. The volatile magic of the Eldertide was prioritized.[28]

It is unknown what happened to the few Druids of Galen that remained on the mainland, but in Stonelore tales, these forsaken also split into circles and roamed Tamriel's forests doing Y'ffre's will.[5] Regardless of their fate, by the Fifth Century of the Third Era, druids were once again present in the regions of the Illiac Bay.[29][UOL 3]

The Major Druidic Circles include the following:

Other ancient groups include:

In the Illiac Bay they are responsible for bringing the bodies of the departed to their final resting place in the crypts.[29][UOL 3]

The Oakensoul Ring is a ring showcasing druidic master craftsmanship with some Direnni influence. It represents the authority of the Draoife, and its power represents the might of the druids. It is estimated to have been forged at least sometime around the Twenty-Fourth Century of the First Era for a figure of importance.

The artifact's power comes from the various components that make up the ring's anatomy. With Stonelore craftmentship, the stone shank frame was grinded into shape with Nedic-like stonework, but aesthetically it is Direnni-shaped. It is enchanted with protective energies, and its central grove is shaped to accommodate a second loop made out of petrified oak that radiates with magicka. This oaken loop is accented with enchanted igneous flakes representing the Firesong Circle, theorized to bring immovable strength. The ring's stones larimar gems represents the Eldertide and contain draoifoglyphs--druidic runes. Lastly, Tears of Y'ffre were applied to the ring, used in druidic spellcraft.[30]

The Cowl of the Druid is a hood enchanted to enhance marksmanship, alchemy, and be able to detect life,[31] suggesting druids specialize in these fields.

The Ritual depicted on stone pillars

Y'ffre is the primary deity associated with the druids, and several druidic circles formed with different ways that they revere him. His existence was known, but his name was not known until the daughters and sons of Anuiel introduced his name.[3]

The druids worship a being known as an Elk of Arrows. Speculation exists on its significance, with one theory that it represents the importance in nature of life and death between hunter and prey. Some also believe it to be associated with Hircine.[12]

The druids of old praised the stars, the Ritual constellation above all.[3]

Una the Green Elk is a lesser spirit worshipped by the Druids.[32][33]