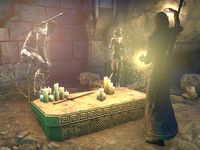 Auramancy is an arcane art that involves evoking memories from the auras left behind on objects by individuals' emotions.[1] By casting auramancy on a lingering aura or magic tied to objects, it may reveal a scene from the past in the form of harmless phantasms that act out a scene of the memory.[2] Auramancy works best on personal possessions that are imbued with a significant emotional aura or have arcane residue clinging to them. As powerful emotions are the most likely to leave their mark on objects, the memories that auramancy reveal are usually those of important events. Some consider auramancy to be a useful tool for unraveling the history of ancient, forgotten places. For instance, Count Verandis Ravenwatch used auramancy to recall memories of the vampires in Nighthollow Keep.

Through the use of auramancy, a memory of the caster's choice can be implanted in an object, subsequently causing the object to glow. Upon interaction with the object, the auramancy will activate and display the memory like it would normally if directly cast. Auramancy can appear as golden or red light.[3]