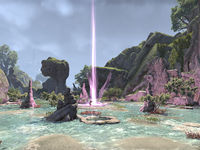 Abyssal Geysers were a magical phenomenon that occurred on the coasts of Summerset Isle during its invasion by the Court of Bedlam and their Sea Sload allies, the Abyssal Cabal, in 2E 582. By alchemically treating and applying magical sigils to sea gems called Abyssal Pearls, the Sload were able to conjure unnatural spouts of water from the sea, which lured Yaghra and various forms of undead.[1][2] High Elf acolytes of the Court of Bedlam communicated with the Cabal,[1] and would carry the Pearls to particular sites to begin the process of opening the Geysers.[3] The Sload hoped to use the Geysers to sink Summerset itself into the sea.[1][4]

A group of adventurers and Aldmeri Dominion marines dispatched to investigate rumors of a Sea Sload incursion in Summerset made the initial discovery of the Geysers. This expedition was attacked by Yaghra and the marines were slain.[5] One of them had compiled notes on the phenomenon, however, which were subsequently reassembled and retrieved.[1][6] With the bulk of the Dominion's forces occupied in the Three Banners War, the proxy government in Alinor relied on the help of adventurers and the local garrison to suppress the Geysers.[7]

The Geysers were initially overseen by the Sload K'Tora, but were later directed by Nocturnal after K'Tora's death at the hands of the Psijic Order.[8][9] Another Sload, the alchemist B'Korgen,[10] saw to the preparation of the Pearls.[1]