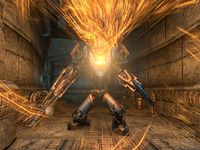 Tonal Architecture is the manipulation of sound to alter reality. The most notable users of Tonal Architecture were the Dwemer Tonal Architects who would work with tonal architecture. Architects could shape tones through their own vocalizations, amplified by magical torcs;[1] they would wear protective headgear known as Dwemeri Tonal Attenuators, which would protect their ears and thought-organs from the harmonic feedback fluctuations of their work.[2] The Dwemer exhibited near total mastery of tonal forces and would use it in mining, medicine, architecture, and even psychology. Ancient Chimeri scholarship states that the Dwemer could employ tonal forces to bend weaker minds to their will—a form of complex aural hypnosis. The Dwemer were able to create massive devices called Tonal Resonators, complex architectural wonders that stood taller than the most imposing giants, and filled cavernous chambers with pipes, dials, and pistons. When enabled, the resonators released a series of powerful tones that could alter the brainwaves of lesser mer and men, with the ability to induce deep calm, profound pleasure, or paranoia and terror; it is said these devices had virtually limitless uses.[3]

In the First Era, following the discovery of the Heart of Lorkhan by the Dwemer, Lord Kagrenac and his tonal architects created Kagrenac's Tools to manipulate the Heart via tonal architecture and use it to create their own god, the Numidium.[4][5][6] Instead, this act ultimately led to the disappearance of the Dwemer in 1E 700, and the tools were subsequently used by the Tribunal and Dagoth Ur to achieve divinity.[7]

A Dwarven Resonator was discovered in the Kwama mines of Gnisis, when miners uncovered a Dwemer ruin within. It caused madness to the kwama inside, making the kwama hostile and making them turn on their own queen and on the miners. The miners inside also became mad, becoming fixated upon the song, humming it over and over and becoming fixated on making the melody right. People afflicted by it described the experience as being able to see the melody, its shimmer, putting a tone and a color to describe it. The resonator itself was disabled by the Vestige and the miners were able to return to normal. Theories existed of it being a mind control device.[8]

Sotha Sil drew inspiration from the Dwemer for his creations, and their influence in his work is rumored to be traceable as far back as before their disappearance.[9] Among these influences was his research on Dwemer tonal architecture, which he uses to perform his divine workings. He refined it further and created items based on their research, such as improving Dwemer tonal forks[10] that could function as a divining rod,[11] and the Resonant Sphere, one of Sotha Sil's minor marvels. The sphere produces an aural response upon applying magic to it, and chimes with a sound similar to the ones that ring in the Brass Fortress.[12]

This Lore-related article is a stub. You can help by expanding it.
Retrieved from "https://en.uesp.net/w/index.php?title=Lore:Tonal_Architecture&oldid=2379521"
Categories:
Hidden categories: