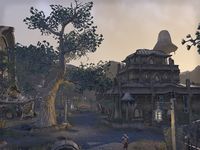 Gnisis (also spelled G'nisis)[1] is a large kwama-mining town found in the northwest sea bluffs of Vvardenfell. Built over the River Samsi in the northern edge of the West Gash, it is a historical town under the jurisdiction of the Great House Redoran. It is noted for its cave dwellings and Redoran-style architecture. Gnisis is centered around the local Tribunal Temple and the Shrine of Justice, one of the Shrines of the Seven Graces that are visited by pilgrims of the temple. It was here that the Warrior-Poet, Vivec and his refugees were buried in gray ash, and he had to feverishly save them from death.[2] The Velothi tower of Arvs-Drelen is found on the cliffside, directly on top of the western gate. 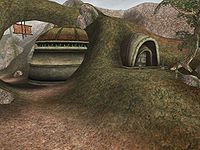 In the late Merethic Era, the Chimer settled around the abandoned Velothi towers during the decline of High Velothi Culture. The people that would create Gnisis settled around the tower of Arvs-Drelen.[3] The tower was later taken over by Baladas Demnevanni, a Telvanni sorcerer who claims to have occupied Arvs-Drelen since before the founding of Gnisis.[4]

According to Tribunal mythology, the village of Gnisis technically predates the West Gash's inception.[5] In light of Sun's Death in 1E 700, Vivec guided refugees to escape the ashstorms and the Blight from Red Mountain, and later decided to rest. The next morning, Vivec woke up to find him and his followers frozen and buried in ash piles, unable to help them. In despair and tears, he was able to break out of his cast and tore the ash from his dying people, breathing air back into their lungs and curing their blight. Sometime later, the Temple built the Shrine of Justice at this very site and the Gnisis Temple was built over it. The story is meant to show Vivec's heroism, in that his heart gave him the strength when his might had failed him.[2]

By 2E 582, Gnisis was one of the very few settlements owned by House Redoran to be built in their signature style, mostly at least. All of their other territories (i.e., Balmora and Suran) were built in the Hlaalu-style by the Hlaalu Construction Syndic.[6] The highest official in town at the time was deputy-prefect, Manore Mobaner. At around this time, the Gnisis Eggmine was closed down and strange noises came from deep within, giving the miner's trauma and turning the kwama mad, to the point where they killed their queen. Deep in the caverns, the researcher, Revus Demnevanni was tinkering with a newly-discovered dwarven resonator, and inadvertently caused serious damage.[7] The kwama mine was restored when a new royal egg was left in place of the previous queen.[8] 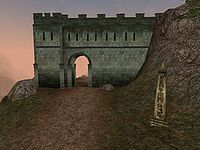 In 3E 414, the formerly protected Temple-territory of Vvardenfell had been re-opened to the rest of the Third Empire and brought a great influx of people to colonize the entire island. The island was split into four territories and House Redoran re-claimed the northwestern portion of Vvardenfell, between the Sea of Ghosts to the wastes of Ald'ruhn, although they have the least amount of influence and may have been marginalized by the other houses.[9] The Imperial Legion built their stronghold, Fort Darius, right on the town's eastern entrance, and the Deathshead Legion stationed themselves as protectors of the mining-town.[10] The general area of Gnisis was under the administration of Councilor, Hlaren Ramoran, who lived in Ald'ruhn,[11] but the town was governed by the local hetmen, Abelmawia Eribael of the Velothi Dunmer. In 3E 427, the Kwama Queen in the mines had contracted the Blight and was promptly cured by a recruit of the Imperial Legion.[12] At the same time, the Talos Cult in Fort Darius planned an assassination attempt on Emperor Uriel Septim VII, who was rumored to appear on Vvardenfell. They were taken down by a member of the Legion.[13]

In 4E 5, the Ministry of Truth over in Vivec City crash-landed onto Norvayn Bay and caused a great chain reaction that led to the eruption from Red Mountain. The land was flooded by lava and the foliage was completely destroyed. Gnisis was no different. The only known person to survive the town's destruction was Neria Relethyl, who was quickly placed in care by the temple priests in Blacklight. In her account of the event, the lava tore down their homes and towers like they were nothing until a great wave of fire crashed down onto the settlement and demolished everything, burning people alive. She managed to escape by crossing the River Samsi, as the lava turned into steam upon contact. The town of Gnisis was completely wiped from the face of Tamriel and Neria laid there for two days before she was recovered by healers. It took her quite a long while to recover from the event.[14]