The inscription of Daedric letters often serves an arcane purpose, such as in the creation of Sigils.

Lettering on the Daedric Axe - from top to bottom: EFCPHEQX - A rare example of a Xayah.

The Daedric letters Xayah (X) and Yahkem (Y) are often omitted from the Daedric alphabet in scrolls and books, but sometimes one of these letters makes an appearance in signs and banners. The most well known appearance of one of these two letters is of the Daedric letter Yahkem, which appears on the banner for Tel Fyr as seen in the picture on the right where the larger letter on the upper right is the letter Yahkem. The letter Xayah can be seen inscribed on a Daedric Battle Axe in Morrowind.nb 1

These are examples of letter Yahkem found (or not) on different items and surfaces.

Aside from the Xayah and Yahkem, five other letters have alternate forms, as seen in the chart. The Doht (D) and Jeb (J) characters are often mirror-imaged from their default orientations, and the Hekem (H) and Yoodt (U) characters also have noticeably differing variants, Hekem's alternate form lacking a prominent vertical stroke, and Yoodt's being shown with a rounded bottom instead of flat. Ayem (A) can also be seen in mirrored form at the end of the Arena canton banners and signs in Vivec.

Another irregularity with Daedric text is that it does not have to be written from left-to-right. For decorative purposes, each word in a phrase is often clustered together with the first letter being significantly larger and colored differently than the rest. The following is an example of a sign hanging over an archway in Gnisis, a city in Morrowind, as well as an annotated version of the banner with the words separated:

Notice how each of the major words in the phrase above has its first letter much larger than the rest and in a different color. It is common for the larger letter to be colored similarly to the backdrop, as with the two letter Sehts (S) in this example.

The clusters in the example above can be arranged in the left-to-right format as follows:

Thus, when the Daedric letters are transliterated into English letters, the message reads:

The daedra and their alphabet are a constant theme throughout Battlespire.

Every level features the following three:

Usage of the alphabet is largely limited to N'Gasta and Clavicus Vile.

Morrowind made extensive use of the Daedric alphabet.

The key image used in Shadowkey has the text "DOUBT IS THE KE(Y) TO KNOWLEDGE" along its stem, and "JONES" right at the bottom, the surname of the artist who drew the image (Mark Jones). This can only be seen on large versions of the image, however.

Oblivion used the alphabet in text far less often than in Morrowind, but it does appear on textures, mostly in the realm of Oblivion itself or other locations associated with the Daedra. For example, these three inscriptions are in Mehrunes Dagon's plane: "HERE IS NO, THERE IS NO", "OBLIVION AWAITS", "MEHRUNES DAGON BECKONS" (last one is in every Sigillum Sanguis). Every Oblivion Gate is in the shape of an Oht. You can also find this text in some books. For example, the Bible of the Deep Ones (found in the Hackdirt chapel in Oblivion) contains almost all Daedric lettering. In addition, the border of the Oblivion box contains the phrase "FOR LORD DAGON FOREVER REBORN IN BLOOD AND FIRE FROM THE WATERS OF OBLIVION" repeated several times in Daedric text; a phrase that also appears in the Mysterium Xarxes. Similarly, the Shivering Isles box cover reads "THERE IS NO GENIUS WITHOUT A TOUCH OF MADNESS", a phrase taken from the Epistles of Seneca the Younger.

In Skyrim, Daedric appears in several places, including:

The Daedric alphabet appears in a number of locations in The Elder Scrolls Online as well. The format here is less uniform than in previous games, as letters, words, or complete phrases may be written backwards, upside down, or mirrored. In addition to specific instances, oftentimes singular letters are used within circles. 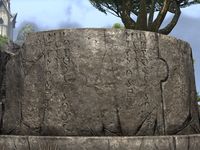 Example of Daedric Script on the Vafe Dolmen in Auridon, read from right to left, "COLDHARBOUR CALLS NIRN OBEYS"

This font set was created by Dongle, and includes the "official" X and Y. This is the font used by all articles using Daedric characters on this site, so you should install it in order to view these pages correctly.

If using the Daedric font above, text can be translated by simply pasting into Notepad or any text-editing software and changing to a regular English font.

If translating from an image or anything not written using a proper font, the Daedric characters can be typed individually into this Daedric Translator.

"Here's an interesting tidbit: speaking with Todd [Howard - Executive Producer at Bethesda], he wanted to emphasize that officially there is no X or Y in the Daedric Alphabet, although a few may have accidentally shown up in Morrowind."[UOL 1]