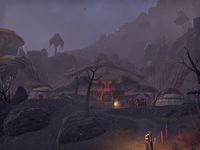 Ald'ruhn is an Ashlander meeting place found north of Balmora. It serves as a site of pilgrimage for the nomads, and is the legendary site where the last emperor crab, Skar, was killed by a combined force of all the tribes. The corpse now serves as a meeting hall.

There's a thieves trove behind Skar's second leg on the east side. 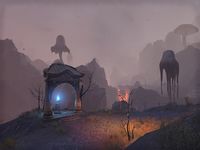 Ald'ruhn Wayshrine is located outside along the southern road to the camp, after the Red Exile camp.

°Only accessible during Divine Delusions