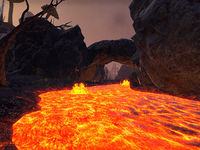 The Ashlands are the central wasteland region of Vvardenfell, surrounding the volcano Red Mountain. Most of the region is inaccessible, aside from a narrow strip of land on Vvardenfell's northern coast, stretching from the West Gash to the Grazelands. The Forgotten Wastes, a wasteland on the slopes of Red Mountain, is situated in this part of the region. In the east of the region sits the Valley of Wind, housing the Cavern of the Incarnate.

On the western slopes of Red Mountain lies a second accessible pocket of the Ashlands, just inland from the West Gash. The Ashlander holy site of Ald'ruhn can be found here.