Siltreen is the eastern region of Deshaan. It includes the towns of Selfora and Silent Mire, as well as the Tal'Deic Fortress. The Siltreen Dolmen is located just south of Silent Mire in the southeastern corner of the region. It is bordered on the north and south by Stonefalls and Shadowfen respectively, but there are no gates to either here. The region of Lagomere forms the western border. 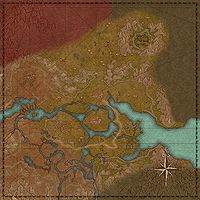 A map of Siltreen
Retrieved from "https://en.uesp.net/w/index.php?title=Online:Siltreen&oldid=2398716"
Categories:
Hidden categories: