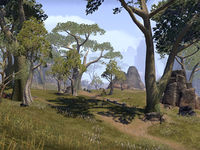 Ephesus is the central region of Bangkorai. It forms a narrow strip across the region, encompassing the Bangkorai Garrison and the Pelin Graveyard, but not much else. The Ephesus Dolmen lies east of the Garrison in the ruins of Arlimahera's Grip. Ephesus is bordered on the north by the Mournoth region, and on the south by the Fallen Wastes. While the Garrison is under Imperial control, the only way to southern Bangkorai is via the lesser-known Sunken Road. 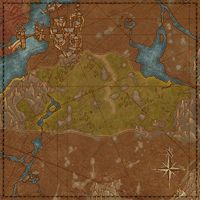 A map of Ephesus
Retrieved from "https://en.uesp.net/w/index.php?title=Online:Ephesus&oldid=2397976"
Categories:
Hidden categories: