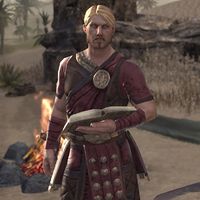 Herminius Sophus is an Imperial scholar excavating various ruins across the Alik'r Desert and Bangkorai. He hired Azei at-Owynok, a local guide, to help him in his travels.

"There are books about this, but as you may be illiterate, I'll enlighten you.
I suspect this is the site where Sword-Singer Navid slew Ihlqub, his ally, over the love of the fair Sayeedeh.
And you think Navid's sword is here?
"The blade of a sword-singer is a physical link between ancient Yokuda and Alik'r.
Navid used this particular sword to slay his rival, and then himself. As a piece of history, it belongs in a proper Imperial museum."
What is a sword-singer.
"The sword-singers were so disciplined, they could create a spirit sword. A sword made from their very thoughts!
Not many could attain such strength of mind. Navid's sword is rare as it apparently persisted after his death."
What happened afterwards? / What happened after his rival's death?
"That's not important to my research. With Sword-Singer Navid and his rival dead, I expect someone else went on to have a dozen children with fair Sayeedeh.
Isn't that how these stories go? The important thing is the sword."
I'll start looking for the sword.
"No one's seen the sword, or had any luck amongst these ruins. A pity, really. I had such high hopes for some of them."
I'll return if I find anything.

Meeting him at the north side of the cave:

"Do you see any discarded notes, journals or … well, that is a concern for another time."

"You … don't I know you? It's so dark in here, and I'm simply too tired to think.
Alas, the world might me denied my brilliance!"
Why are you just sitting here?
"Isn't it amazing how we all ask ourselves such questions? Really, it's all Azei at-Owynok's fault.
He's my guide, or he was. I have no way of knowing where he could be now, but I was here to tour the ruins. That is why you're here, isn't it?"
What ruins? Your guide went missing in some ruins?
"Julianos's truth! Such ignorance is breathtaking.
If you'll help me find out what has happened to Azei at-Owynok, I will tell you all about the ruins. If he's dead, I would want to take back the wages I'd paid him, at the very least."
I'll help you find your guide.

After he will follow you around while you look for Azei and can be asked further questions.

"I don't know how much longer I can survive in this decrepitude."
Do you know which way Azei went?
"He went further into these caverns. It's an old route between the deserts of southern Bangkorai and the more temperate northern area.
You don't suppose he's gotten lost, do you? That wouldn't bode well for his reputation as a guide, would it?"
Where are the ruins you mentioned?
"First things first! Let's find Azei at-Owynok, especially as he left me bereft of my goods and gear."
Let's move out.
"At least I still have my manuscript about Alik'r to write … except Azei carried it with him."

When spoken to upon finding Azei:

"I don't think you appreciate how awful my situation is. You probably live like this every day …."

"I hardly see why you deserved payment at all. Still, you are one of the few who actually bothered to return to let me know."

Once Azei has been rescued, Herminius will wander out into the main chamber where he can be spoken to and assisted again.

"Oh, you're still here? I don't suppose you'd be willing to help me on another grand adventure, would you?"
What are you talking about?
"I've been unable to research this site properly before moving on, but my travel arrangements are already made.
Do you understand what that means?"
What does that have to do with me?
"My editor gave me a list of other scholars who have gone missing here, presumably to frighten me!
Aminyas and Dechery are their names, and I want you to search for their camps and see if they had research I can … cite."
I'll see what I can find.

After accepting the quest:

"Aminyas may have been a xenophobic, dour old Elf, but he's at least thorough in his arguments.
As for Morgaulle Dechery … it might help to inject some romance into the piece, since the woman was so obviously taken with King Joile."
You're going to take their research and say that it's yours?
"Of course not! I intend to recompile their research into my own words and add whatever conclusions suit my opinion.
Don't you know anything about the way academic writing is penned?"

Once the research has been found:

"I can't believe this could possibly be taking you so long. How hard could it be?"
I found the texts you wanted.
"You've found the notes! Oh, superb. I'm sure I can cobble these together and keep the high points of the voyage.
I might even make the two of them my co-authors—no that's absurd! Here, a pittance for your trouble."

After Publish or Perish has been completed:

"Now all I have to do is locate that wildlife specimen Azei calls our pet. If only I'd had that monkey stuffed stuffed when we first found him, we'd know precisely where he is!
Ah, well. We could always go back to the Alik'r Desert for another if need be."