The Northern Woods are the northwestern region of Reaper's March. It contains the city of Arenthia in the north, as well as Fort Grimwatch and Greenhill farther south. The Northern Woods Dolmen is just south and a bit west of Arenthia, along the river. It is bordered on the west by Malabal Tor. Dawnmead lies to the east and Jodewood is to the south. 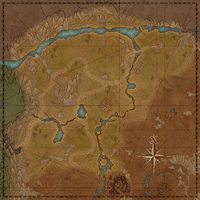 A map of the Northern Woods
Retrieved from "https://en.uesp.net/w/index.php?title=Online:Northern_Woods&oldid=2398463"
Categories:
Hidden categories: