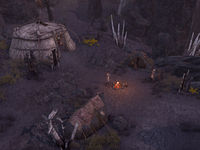 Ashlanders are a faction of nomadic Dunmer. It comprises numerous different tribes, mainly found in Stonefalls, Deshaan and on the island of Vvardenfell. On Vvardenfell there are four main tribes (Ahemmusa, Erabenimsun, Urshilaku, and Zainab), plus some bandit groups consisting of outcasts from the main tribes. On the mainland, there are two major tribes, the Mabrigash and Kagesh, and two smaller hostile tribes, the Vereansu and the Ulath. For more information, see the lore page.

This faction has two unique equipment styles, one of which can be learned by the player. The chapters for this style are occasionally given as rewards for completing the Ashlander daily quests given by Huntmaster Sorim-Nakar and Numani-Rasi. Crafting Ashlander items requires

Ash Canvas. Shadow of the Red Mountain is a medium armor set in the other Ashlander style that can be found in Stonefalls.

There are multiple achievements associated with the quests, styles, and locations for this faction.