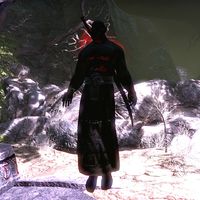 Malacath is the Daedric Prince of Outcasts. He appears as an Orc in Obsidian Scar during the related quest. He also appears as the Aspect of Malacath in Old Orsinium. In Wrothgar, many of the Orc people are divided over worshiping him or his alleged predecessor, Trinimac.

Foul Deeds in the Deep[edit]

In the northeast Obsidian Scar, Lashgikh performs a ritual at the shrine of Malacath and he appears afterwards:

Lashgikh: "We've got everything we need for the ritual. Come, friend. Let's have a word."
Lashgikh: "Malacath, God of Curses, I appeal to you in my rage!"
Lashgikh: "My better half lies dead. My blood burns. My blade hungers."
Lashgikh: "Grant me vengeance. Grant me justice. For the honor of my love lost."
Lashgikh: "Grant me Osgrikh and I will grant you his head in your name."
Malacath: "Lashgikh, I hear your oath. Osgrikh the Minor turned my Oathbound against you―one of my own."
Malacath: "And you seek justice for this? Good. Then your anger is my anger."
Malacath: "Osgrikh the Coward flies from your fury―from your champion. I will not have your rage denied! Prepare yourself and prepare your champion. Osgrikh comes to you."

Malacath then disappears and Osgrikh is summoned for you both to defeat.

Flames of Forge and Fallen[edit]

After lighting the first pyre, you hear his voice.

Malacath: "Another seeks to light my pyre. Weaker than those who fell? We shall see."

Speak with his Aspect.

"You stand before Malacath, Daedric Prince of Vengeance. Mortals often gawk and grovel. You do not."
You want me to bow?
"Bow? Never bow! Only show the top of your head when you smash in your enemy's face!
Do you think I require supplication? Do you mistake me for Molag Bal?"

What do you want?
"Light the great pyre so my wrath can smolder for another generation.
Breach the gates as invaders breached Old Orsinium."
Why can't you just open it?

"You wish the Daedric Prince of Vengeance to help you open a door? "Jiggle the handle?"
Life is a struggle, mortal. Use what little sense you have and surpass this mighty ordeal. Or bite out your tounge and bleed to death."

How do I open the gate? (This progress quest)

After agreeing to honor the clans that defended Old Orsinum, head deeper into the ruins. At each brazier devoted to a clan, light it and the Aspect of Malacath will speak about them:

You will then be required to unlock a door by pressing the stone plates in order, according to the nearby notes. Once you do it correct, the Aspect will speak once more:

Aspect of Malacath: "If there are not tools to build strong walls, then there is no need for weapons to defend. And if you cannot feed your people, there will be nothing to rule. A strong ruler is nothing if he stands alone."

Once inside the Hammer's Bypass, speak to the Aspect of Malacath again; he now instructs you to scorn the fallen clans that caused the fall of Orsinium:

"You honored those who forged Old Orsinium from nothing. Now you will curse those who caused her to fall."
Why would I curse the clans?
Why would your own guardians try to stop me?

"Mortal lives are a litany of despair and treachery. Only wrath can see you through the darkest days. Succeed, despite all those who oppose you. Grasp at a most spiteful triumph!"

All right, I'll open the door and light the great pyre.

The manner of cursing is much similar to the honoring - you need to light the braziers of each clan and learn which clans are deemed responsible for the downfall of Old Orsinium. After lighting each brazier, Malacath says:

To unlock the way to the Great Pyre, you will have to figure out another Stone Plate puzzle. After lighting the pyre you can speak with the aspect once more.

"The great pyre burns. Its ashes will smolder for years. You did this, despite all arrayed against you."
What does that mean?
"Today you rekindled the simmer of hatred at the heart of the Orcs. May it fuel their vengeance for another generation.
Go. Spread my wrath to the corners of the world!"

If you give the Vengeful Eye to the Shrine of Malacath in Wrothgar, Malacath will speak through his statue:

"The Vengeful Eye is yours. Wear it at your breast … let it bathe in the spattering blood of your enemies. Feed it your wrath, your hatred, your vengeance!
Until someone stronger takes your place."

This Elder Scrolls Online-related article is a stub. You can help by expanding it.
Retrieved from "https://en.uesp.net/w/index.php?title=Online:Malacath&oldid=2390056"
Categories:
Hidden categories: