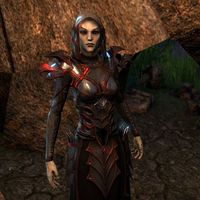 When you walk into the Grotto, she will exclaim "Who's there?"

You can then speak to her:

"You're not part of my expedition. Interesting.
This is no random chance. I believe you're the answer to our problem."
What problem?
"We're searching these caverns for a sacred shrine that's been lost for ages. Our problem is that Dreugh and Goblins are overrunning the place.
Goblins are slow-witted. If you kill their chieftain, they must accept you as their leader."
What then?
"Stick the chieftain's head on a spike, somewhere the whole tribe can see. Then lead them to attack the dreugh.
Once the dreugh's king is dead, we'll be free to explore. And to reward you handsomely, of course. "
I'll kill both their leaders.

She can then be asked more about her group.

"Goblins are pathetic beasts, but they have their uses."

Who are you people?
"We follow the ways of the Chimer, not the false gods of the Tribunal. We're servants of the Webspinner, whom Vivec usurped. Dunmer, goblin, or Dreugh, we're all caught in the strands of the spider's web."
What is this shrine you're looking for?

"I'm sworn to secrecy by my order, but rest assured, our cause is just.
Clear our path into the caverns, and you'll be rewarded. That's all you need to know. and that's all I'm permitted to discuss."
I'd like to know what I'm getting into.

"If you don't think the reward is worth the risk, perhaps you should leave."

"Unbelievable! We've spent years searching for the Spinner's shrine, and these filthy creatures have been sitting right on top of it all along!"
The caverns are safe now.
"Yes. You've done as we agreed. Take this for your work.
Now you will leave. Immediately. The secrets of the Spinner's shrine are not for outsiders."

She can be spoken to a final time:

"You were ordered to leave. What lies beyond this door is not for your eyes."
Why so secretive?
"Secrets are a Spinner's currency. Besides, this shrine contains ... privileged information your dull mind would not comprehend.
Have I made myself clear? Your services are no longer required."

She will emerge to deal with the interlopers when Two-Blades begins the ritual to destroy the Obsidian Husk.

Defender Two-Blades: "Such power...such corruption. Let's end this now!"
<Screen goes black.>
Defender Two-Blades: "By the Eight, what's happening? I can't see!"
Vila Theran: "So you're the ones killing my precious flock."
"This stone belongs to my mistress Mephala. Return it, and your death will be swift."

Vila can then be engaged in combat. 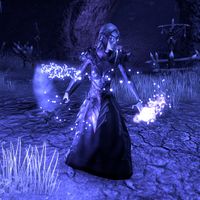 As a boss type enemy, Vila Theran is immune to all forms of crowd control effects.

Growing Corruption
The boss teleports to three random players and drops black circles on them. These black circles grow in size and do high magical damage over time as indicated by red circles. To minimize the area covered, players should stay near each other so that the circles overlap as much as possible. A common strategy is for the party to stay near the entrance and wait for her to teleport over and drop the circles. When that happens, the party moves over to her starting position. When she teleports back, the party moves back to the entrance and so on.
Shadow Conduit
This attack is telegraphed by a pillar of light appearing over the boss's head. The boss will then fire lasers at all players, dealing high magical damage over time. To stop this, players can run into the protective bubble around the nearby wayshrine. Alternatively, if the party has enough healing, the players may choose to outheal the damage instead. Killing Vila Theran without using the protective bubble will net players an achievement.
Channel Shadow
(?)