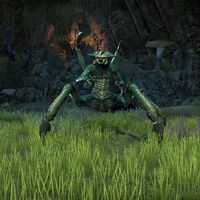 Kra'gh the Dreugh King is a dreugh and the final boss of Fungal Grotto I. A monster set exists that was inspired by this boss.

It is also the namesake of the Kra'gh set and the basis of a trophy, bust, and outfit style.

As a boss type enemy, Kra'gh is immune to all forms of crowd control effects.

Jagged Swipe
A basic melee attack that does moderate physical damage.
Lunging Strike
A heavy melee attack that does high physical damage and knocks the target back. This attack should be blocked if possible.
Storm Flurry
The boss channels a series of swipes at a target in front of it, dealing moderate shock damage over time.
Lightning Field
The boss summons a large storm around itself dealing very high shock damage as indicated by a red circle.
Summon Mudcrabs
At 70% and 30% health, the boss will run to a fixed location in the arena to summon a few mudcrabs to attack the party. These should be killed quickly to simplify the fight.

This Elder Scrolls Online-related article is a stub. You can help by expanding it.
Retrieved from "https://en.uesp.net/w/index.php?title=Online:Kra%27gh_the_Dreugh_King&oldid=2391164"
Categories:
Hidden categories: