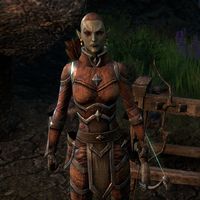 Gamyne Bandu, as seen in Fungal Grotto I

In Fungal Grotto II, she will be frozen in place on a boulder, being awoken by four mages after the spider cultists in the room are killed. 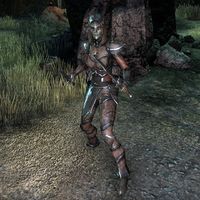 "I've no time for pleasantries. Speak."
What's going on here?

"An old story. Goblins and Dreugh fighting for territory. They seem to have reached a stalemate.
Until that's broken, it's not safe in there."
What are you looking for?

"The Webspinner. Mephala, princess of secrets; The Anticipation of Vivec; she who weaves the sordid web of human affairs. Do you know nothing of the world you live in?"

Speaking to her after defeating Kragh:

"Thank you for your work, but we no longer have need of you here." 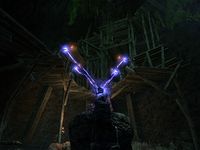 When she awakens, she becomes hostile.

"By the Ebony Blade, I will end you."

As a boss type enemy, Gamyne Bandu is immune to all forms of crowd control effects. 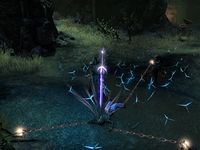 A player is subjected to a torture session

Torture Session
The boss damages and stuns a random player, and four Shadow Tormentors chain the player to the ground. A sword appears above the player's head and slowly descends. This attack cannot be avoided, and players cannot break free from it. To escape, the other members only need to kill one of the Shadow Tormentors in order to free the player.
Shadow Execution
If the players fail to free the trapped party member in time, the sword will impale that player resulting in an instant death.
Shadow Chains
The boss throws a purple orb at a random player. If the orb hits, that player will take moderate magical damage. On top of that, a purple beam may form between that player and another player. The purple orb can be dodged by rolling to ensure the beam does not form.
Chains of Misery
The beam does high magical damage over time. To break the beam, the two players must move away from each other until the beam breaks. To minimize the damage done by this attack, players should spread apart so the beam breaks faster.
Summon Obsidian Aspects
At various points throughout the fight, the boss will vanish and summon four Obsidian Aspects to attack the party. These enemies do moderate physical damage. Once all four have been defeated, the boss reappears. There appears to be no time limit to this stage of the fight, and players can keep one of the aspects alive to buy them time to recover resources before resuming the fight.