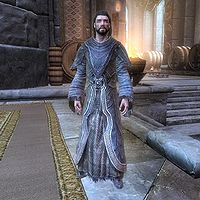 Jurgen Windcaller, a Nord warrior who came to be called the Calm, is said to have had the strongest thu'um of the First Era, possibly of all time. As an militant thu'um wielder, or 'Tongue', he was a prominent war leader in the First Empire of the Nords and utilized his voice as a weapon and a way to grow in strength, like many Tongues of the time. This changed for Jurgen, however, when the Nordic armies suffered an ignominious defeat at Red Mountain. Jurgen would use the defeat as inspiration to discover the Way of the Voice and found the Greybeards.

When spoken to, Jurgen may comment on his devout followers, the Greybeards, saying, "My disciples still follow the difficult path - the Way of the Voice is neither wide, nor easy. But if you stray from wisdom then to Sovngarde you will not return."

He will also warn you, "Fate drives you, but you follow your own path. Choose wisely, lest you wander into evil."

He wears Greybeard's robes along with a matching pair of boots.

This Skyrim-related article is a stub. You can help by expanding it.
Retrieved from "https://en.uesp.net/w/index.php?title=Skyrim:Jurgen_Windcaller&oldid=2092746"
Categories:
Hidden categories: