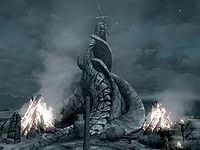 Overview of the statue and camp

The Sacellum of Boethiah is the shrine to the Daedric Prince Boethiah.

The shrine is composed of three levels, with blood stains on the ground and burned corpses around the shrine. If you are level 30 or higher, a number of Boethiah Cultists and a Priestess of Boethiah will be present; speaking to the Priestess will start Boethiah's Calling if it has not already begun. It is located in the mountains east-southeast of Windhelm.

On the lowest level is a tent and three bed rolls, as well as a small arena. There are also several crates near the tent, with three bottles of skooma found on one of them. On the middle level is a tent surrounded by cages. Inside the tent, there is an Alchemy Lab and an Arcane Enchanter. On the highest level is the actual shrine, which has a mysterious pillar in front of it. If you have a follower with you inside the circle, you can activate the pillar. Tell your follower to use the pillar, and they will be drawn towards it. This allows you to kill your follower and loot their corpse without consequence. There's also a tanning rack nearby.

The magic pillar is surrounded by spiral Daedric carvings on the ground, with a magical channel that lights up when you enter its zone. The Daedric carvings are mirrored, and must be read from the outside to the center. Translated into the Latin alphabet, the text reads as follows:

This is a direct quote from the book Boethiah's Proving.