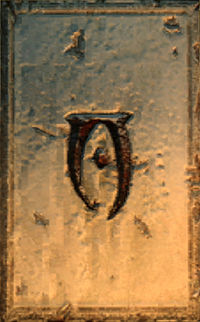 Front cover of the Mysterium Xarxes

"Its name is the 'Mysterium Xarxes', Aldmeretada aggregate, forefather to the wife of all enigma. Each word is razor-fed and secret, thinner than cataclysms, tarnished like red-drink." — Mankar Camoran, Commentaries on the Mysterium Xarxes, Book One

The Mysterium Xarxes was a tome written by Mehrunes Dagon, who scribed it in "the deserts of rust and wounds".[1] It was an artifact of great—and evil—power. The Xarxes was said to have a vile corrupting influence; reading from the book required magical protection from its powers, even merely handling it was said to be dangerous.[2]

The book was given by Dagon to Mankar Camoran. After studying the tome, Mankar wrote the Commentaries on the Mysterium Xarxes (also known as the Mythic Dawn Commentaries). Inspired by the prophecies and promises within the book, Mankar founded the Mythic Dawn, a Daedric cult devoted to Mehrunes Dagon. The Xarxes acted as the cult's holy book, and was stored in the Mythic Dawn's hidden shrine in the caverns beneath Lake Arrius in Cyrodiil. Using the power of the book, Mankar created Gaiar Alata, or "Paradise", an alternate realm where the souls of Mythic Dawn cultists went in death.[3]

In 3E 433, following the Mythic Dawn's assassination of Emperor Uriel Septim VII and all of his legitimate heirs, the Blades infiltrated the cult and stole the Mysterium Xarxes from their shrine to Mehrunes Dagon. It was taken to Cloud Ruler Temple, where Martin Septim, the illegitimate son of Uriel and the heir to the throne, translated the Xarxes and discovered a way to create a portal to Camoran's Paradise. The ritual required a Great Welkynd Stone, a Great Sigil Stone, a Daedric artifact, and an Aedric artifact. The Hero of Kvatch entered Gaiar Alata and defeated Camoran, retrieving the Amulet of Kings. The Mysterium Xarxes was destroyed in the process.[3]

Only a single, singed page survived the events of the Oblivion Crisis, and came into the possession of the Vesuius family, who were once members of the Mythic Dawn. In 4E 201, the page was put on display by Silus Vesuius in his "Mythic Dawn Museum" in the Skyrim city of Dawnstar.[4]