The Dragon Alphabet is the alphabet used for the Dragon Language. Text written in the Dragon Alphabet is found on walls in ancient dungeons and on burial grounds in the form of Word Walls.[1] The alphabet consists of 34 symbols: 25 that map directly to letters in the Latin alphabet, and nine that represent pairs of letters. There is a symbol for every letter in the Latin alphabet.

The shape of the letters is constrained by their need to be written using three large talons and a vestigial fourth digit called the dewclaw. Thus, all of the character symbols consist of a maximum of three scratches occasionally punctuated with a dot from the dewclaw.[UOL 1]

The letter "C" does not usually appear, due to the fact that the letter is unused in the Dragon Language. See Legends Card Packs below for details.

The first text in the Dragon Alphabet appeared in a Game Informer post about their February 2011 edition, along with a post about translating the cover. The original article contained the following samples of Dragon text:

Coincidentally, this poem is also the song that is heard throughout the game when the player enters combat with a dragon or if the player lets the game run on the main menu without selecting an option.

Originally known as "Dragon Poem", it was revealed through the in-game book Songs of Skyrim that this is only a portion of a longer work. Loading Screen text name the work Song of the Dragonborn. The full version, in both English and the Dragon Tongue, can be found in Songs of Skyrim. 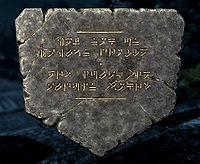 A Dragonstone found in Bleak Falls Barrow has the following inscription: 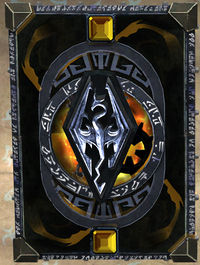 Heroes of Skyrim Legendary card packs in The Elder Scrolls: Legends feature the Dragon Alphabet, but it is used to replace English characters rather than words in the Dragon Language. Legendary packs display the following phrases:

This is the only instance of the letter "C" in the Dragon Alphabet.

A Dragon font containing all known characters is available for download.