Balmora (translated as "Stonewood"[1] or Stoneforest in the Dunmer language)[2][UOL 1] was one of the four cities of the district of Vvardenfell, known primarily as the district seat of power for the Great House Hlaalu. The city is built in the river valley of the West Gash and was the largest settlement on Vvardenfell, only behind the temple-metropolis, Vivec City.[3] It was initially a stronghold of House Redoran, but through some business and architectural maneuvers, it was assimilated into a town of House Hlaalu.[4] The city was devastated during the eruption of Red Mountain in 4E 5, but was subsequently rebuilt and re-inhabited.[5]

Map of the Balmora Region 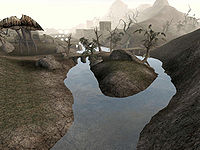 Balmora is a vast city built on the banks of the Odai River, in the midst of a great valley that marks the southernmost edge of the West Gash. It was essentially the gateway between the West Gash and the pristine grazelands that laden the south-central coast. Much of the land that surrounds the city is rocky scrubland, natural stone menhirs, and green hills. It provides little flatland for other people to settle on but despite this, the roads are generally toward ground-level, making them easily identifiable. In the Third Era, the Imperial Fort Moonmoth was built southeast from Balmora, right on the Foyada Mamaea. The main road ran through Balmora, going further north toward the Imperial-charter town, Caldera and the rest of the region, or going down south near Lake Amaya and Pelagiad. The city itself is split into three districts. The Commercial District is found on the western side of the river, where it is the home of several businesses and the town plaza. Each city gate is found in this area and the Silt Strider port is located by the south gate. The Cammona Tong had their own council club in the commercial district. The main square and the road that contains the local guilds is called the Trade Street.[6] Labor Town, on the east side of the river is the general residential district, housing the common-folk and several corner clubs. Finally, the High Town is on the northwestern hill that looms over the city. It is accessible from the commercial district, which lies at the base of the hill. It houses Balmora's nobility and even the Tribunal Temple of Balmora.[7] Stoneforest is neighbored by several settlements, including Markgran Forest to the north and Old Run to the southeast.[8]

In the midst of the Interregnum, the Great House Redoran expanded their reach into the island of Vvardenfell and sought to build various settlements across the region. In light of this, House Redoran struck a deal with the Hlaalu Construction Syndic, in which they used their labor and resources to build these new towns for what was deemed a suspiciously low cost. Bustling trade towns like Balmora and Suran were built (or expanded upon, according to some sources),[10][11] Though the contract stated that the towns were to be built in the Redoran style of architecture, the Syndic built them in the Hlaalu-style of architecture. At that point, House Hlaalu's only foothold was the fishing-village of Seyda Neen but their involvement in these places gave them the leeway to create business opportunities and have a near-monopoly on the region's trade.[4] Even then, Balmora and Suran were still governed by House Redoran, with the former administrated by Councilor Eris Releth.

In 2E 582, the son of the councilor, Ulran Releth was a Redoran officer and unlike most house-Dunmer, did not have hatred toward the Ashlanders. When one of his soldiers killed an ashlander trader despite Ulran's demand to stand down and targeted another, the captain was forced to put him down, which promptly had him exiled by the Redoran council. He left to the wilderness and took refuge with the Zainab Tribe near Kudanat. However, the then newly-promoted Captain Brivan Malrom gathered his Khajiiti mercenaries and set siege to the camp, slaughtering tribes folk in droves despite orders to avoid violence. Ulran was killed deep in the mines.[12][13] Releth's banishment brought ire to the Councilor's daughter, Veya Releth and so she ran away in home to find her brother, completely unaware of his fate. A town-wide search was conducted by the city guard, to the point where outlanders were asked to help.[14]

The councilor enlisted the help of outlander and after chasing Veya's close friends, came into contact with the Morag Tong and started to look for Veya's mentor, the assassin, Naryu Virian.[15] The outlander had become involved in what had turned into a conspiracy, stealing a register in a manor in Labor Town to uncover details about Ulran's exile. Veya was hiding out in an old fungal cave in the Bitter Coast until the Redoran mercenaries had tracked her down. Veya, Naryu, and the outlander attempted to escape through the Mallapi tunnels until they were cornered by Captain Brivan and Councilor Eris. They were able to pass through on the condition that they meet again on Veya's own terms and so the trio went to the ruined Kudanat Camp, where they learned about Ulran's fate.[16]

The truth came out when Veya interrogated a Redoran soldier imprisoned in Hlormaren. The incident with Ulran was meant to be a test of loyalty to House Redoran conducted by then lieutenant Brivan. Even the initial instigation was a ploy to test the officer. In her unbridled rage, Veya left to kill the captain, her father, and the Redoran Council at the garrison outside of town.[17] Her revenge was delivered ruthlessly on Brivan and Eris, but the outlander subdued her before she could cause any harm. High Councilor Meriath intervened and promised to sweep the incident under the rug as long as her story was corroborated. Since the Redoran acted in poor faith and Morag Tong rules were violated by Veya's actions it was appropriate and beneficial to all involved to cover up the whole situation. In the end, Naryu and the outlander were left to decide Veya's fate.[18]

Balmora in the Third Empire[edit] 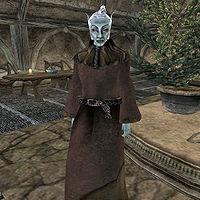 During the Imperial Simulacrum in the late-Third Era, the village of Stoneforest was an active settlement. It was ruled by Count Caskan and had a rivalry with Karththor Dale.[2] In 3E 414, the formerly protected Temple-territory, Vvardenfell had been reopened to the local populous of the Empire and waves of people built communities in the previously uninhabited region. The island was split into four territories and House Hlaalu claimed the southwest portion of Vvardenfell that had once belonged to House Redoran, extending between the Bitter Coast and Balmora, to the Ascadian Isles and Suran. The city of Balmora had grown exponentially in the years that followed, becoming the second-most populated settlement behind Vivec City.[7][19] In 3E 426, there was a minor tax revolt in Balmora which was suppressed. The Hlaalu claimed there was no harm done in any manner, while the Redoran claimed that there was significant damage in property and life.[20][21] It did concern the Hlaalu Council, who sent deputations to Duke Vedam Dren about the high tax rates and the effects of the high tariff of trade.[20]

During the Blight Outbreak in 3E 427, the Hlaalu Council were not stationed in their regional-capital, instead, they were in their various estates and manors in the Ascadian Isles. The highest-ranking member of House Hlaalu that stayed in the council hall was Kinsmen Nileno Dorvayn, who governed the city while the council was away. It was at this time that a certain outlander was present on Vvardenfell. They frequented Balmora's labor town where their Blades contact, Caius Cosades would relay them the information and missions in regards to the Nerevarine Prophecy.[22] Eventually, Cosades was recalled back to the Imperial City and that individual was soon recognized as the Nerevarine.[23]

In 4E 5, the Ministry of Truth crashed into Vivec City and caused a great chain reaction that led to the eruption of Red Mountain. The event became known as the Red Year, in which severe ashstorms and lava floods pillaged the entire island of Vvardenfell. While mainland cities like Mournhold were largely left unscathed, the entirety of Vvardenfell was flooded by seas of lava and great cities from Balmora to Sadrith Mora were completely destroyed. A Redoran-led relief effort was sent into the island roughly a month later. The commoner, Deros Dran was sent to Balmora and found the city in shambles, with nothing left standing. There, Deros Dran spent two months rebuilding, which could imply that Balmora took roughly two months to rebuild.[5] By the late Fourth Era, Balmora was still an inhabited settlement. The Nord Tyra Blood-Fire, founder of the infamous Crimson Dirks bandit gang, grew up an orphan in the streets of the city and was still alive in 4E 201. Given her human lifespan, this would indicate that Balmora was an active settlement only a few decades prior, well over a century and a half after the city's devastation during the Red Year.[24]