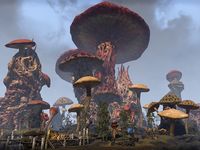 Sadrith Mora (translated as "Forest of the Mushrooms" in the Dunmer language)[1] was one of the four cities on the district of Vvardenfell, for which it served as the district seat of power for the Great House Telvanni. The city also serves as the home of the Telvanni Council, but only one of them lived in the city, that being the councilor in Tel Naga, the central tower in Sadrith Mora. Most ways into the city for common-folk is through the sea or teleportation, and if anyone wanted to enter the city, they must acquire a certification of hospitality.[2] 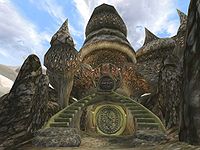 Sadrith Mora is built on the largest island in the middle of the Zafirbel Bay, between Azura's Coast and the Inner Sea. It shares the island with a large daedric ruin called Anudnabia,[3] and an ancestral tomb of Clan Sadryon,[4] one of the thirty revered families of Vvardenfell.[5] Typically, the island is inaccessible by foot, always either by boat or through some method of teleportation.[2] But in the mid-Second Era, there was a waterlogged, mostly unmarked path that ran through Tel Fyr and across the Zafirbel Bay to Sadrith Mora's docks.[6] The region is marked with tall and arched rocks and riddled with the district's largest species of mushroom.[7] Outside of the city are operations overseen by Telvanni slavers, such as mines and Muck Sponge farms.[8]

Tel Naga was the epicenter of Sadrith Mora and it was the largest building in the city, surrounded by the stone bricked street, tall samples of milkcap mushrooms, and other Telvanni towers. The docks were located on the west side of the city. It was divided from the rest of the city by the Gateway Inn, a two-story inn, and the only service in Sadrith Mora accessible to foreigners without hospitality papers. The city's north side is Sadrith Mora's great market, home to the city's greatest artisans and traders, and further north is the Telvanni Council House, a large orb held together by mushroom stalks. The path that extends from the south leads to Wolverine Hall, the Empire's bastion in Telvanni jurisdiction. In the center of town is the seat of power, Tel Naga, the largest tower in the city and residence of the Telvanni councilor in Sadrith Mora.[2]

In the mid-Second Era, Tel Naga was occupied by the Archmagister of Vvardenfell's House Telvanni, Nelos Otheri and the Gateway Inn was placed on the other side of the city, away from the docks.[8] In 2E 582, a magically talented Argonian slave, Sun-in-Shadow met with the council of Telvanni mouths and was freed from her bonds, then proceeded to the rank of a hireling, in service of Nelos Otheri.[9] With help from an Outlander, she attained the role of oathman[10] and along the way, clashed with Magisters such as Gothren of Tel Aruhn. As time passed, Sun-in-Shadow continued her work to become a magister.[11]

By the late Third Era, Tel Naga was occupied by Councilor Neloth, which in turn made him Master of Sadrith Mora and its surrounding environs.[12] A year later in 3E 427, the Nerevarine appeared on Vvardenfell to fulfill the prophecy and become acknowledged as the Hortator of House Telvanni. They traveled to Sadrith Mora to meet with Master Neloth, who nonchalantly gave them his blessing and dismissed them just as quickly.[13] After the events that transpired in Red Mountain, the Arch-Mage of Vvardenfell's Mages Guild, Trebonius Artorius gave the order for death to the Telvanni Councilors.[14] And while it is unknown how the other councilors faired, Neloth had survived the ordeal and at some point moved northwest into Solstheim, where he constructed a new tower called Tel Mithryn.[15]

In that same year, there were rumors that the Gateway Inn was haunted and it displeased the Prefect of Hospitality, Angaredhel. Neloth's mouth, Arara Uvelas tried to kill the ghost multiple times, but it came back every time. Eventually, the Prefect enlisted the help of a traveler who exposed the perpetrator as Uleni Heleran, a conjuration expert of the local Mages Guild, who did it as revenge against Angaredhel when he brought her to the magistrate for entering the city without hospitality papers.[16]

When the Ministry of Truth crash-landed on top of Vivec City in 4E 5, it caused a great chain reaction to Red Mountain and resulted in an eruption that laid waste to Vvardenfell. Sadrith Mora was one of the great casualties in the entire district and many reports were sent out to the province at large. Many people on the mainland mourned the loss of their loved ones on the island. The event has since been remembered as the Red Year, but in time, a Redoran councilor in Mournhold started a relief effort to rebuild and support the settlements hit the hardest on the island. It is unknown how badly Sadrith Mora was hit in the event.[17]

As it is customed to House Telvanni, anyone that wants to enter Sadrith Mora proper must first obtain a certification of hospitality from the Prefect of Hospitality in the Gateway Inn, as it was dictated in the Collective Articles of the Council of the Great House Telvanni.[18]

There is a book called The Seed written by the playwright, Gor Felim, under the alias of "Marobar Sul" that is an adaptation of an Argonian tale created by slaves in southern Morrowind. The setting in the story varies in different tellings but usually, they take place on Vvardenfell, specifically in Sadrith Mora. "Sul" claims that the original story is based on his rendition.[19]

Along the shores of Sadrith Mora and the rest of Zafirbel Bay are very rare seashells called Red Star Shells, which are very valuable in the eyes of House Telvanni. They can be found on the shoals of the region.[20] A Sadrith Mora quilted snood is headwear popular among people of high power, meant to reflect their position.[21]