Nix-Oxen are large arthropods from Vvardenfell. They look like giant fleas; they are approximately the size of a horse, and move on six hairy, stilt-like legs. They are typically gentle giants that feed on fungus,[1] and are distant relatives of the nix-hound.[2] They use their mandibles to break open hardened mushrooms, and lap up the soft matter inside.[1] Nix-oxen were first domesticated by the Erabenimsun Tribe, whose legendary Ashkhan, Ashu-Ammu, rode one into battle.[3] Occasionally, Nix-oxen can grow to be so large and aggressive that local communities may find it to be within their best interest to kill the beast. The title of "Great Zexxin" may be given to one such nix-ox, as it indicates that the creature is the most dangerous nix-ox in the land. [4] By the late Third Era, Nix-Oxen on Vvardenfell were driven to extinction by the Ash Blight.[5]

Nix-Oxen were known to come in a variety of hues. Firemoth Island was home to a unique flame-hued species known as the Firemoth Nix-Ox. These beasts had a fiery temperament and were well suited as combat steeds.[6] The Sheogorad region was home to the Dagon Fel Nix-Ox, a species with eerie blue coloring. Some scholars believe this coloration was the result of strange energies that once emanated from the ruins of Mzuleft, but these energies had since dissipated by the time of the Interregnum.[7] The Chyle Seamed Nix-Ox is a lighter colored species first tamed for use as steeds by the Ahemmusa Tribe. These steeds began to see use outside the Ashlands and were noted for their love of snow.[8]

House Dunmer have particular methods for capturing and taking wild nix-oxen. Nix wranglers work in groups of six or seven, and typically hunt during the early morning while the creatures are asleep. The wranglers survey their haul to ensure that none of the nixes are too frail or small. If a nix didn't pass inspection, the wrangler would cull it from the herd; stabbing it beneath the chin and kicking it out of the pen. Surviving nix-oxen had prices marked on their carapace in black chalk, and would then be separated to two categories, Nix-Tovo and Nix-Rima. Nix-Tovo are older and have thicker chitin, which cracks under pressure. Larger, stronger nix-oxen are cheaper on the market than the younger Nix-Rima. Nix-Rima have thinner, more pliable chitin. By applying a little bit of pressure, their plates can be separated enough to see the organs underneath. For this reason, Rima oxen were more valuable than Tovo oxen on the market.[1]

Wealthier nix farmers could hire tradesmen known as drenlyns to tame their nix-oxen for them. The drenlyn would bore into the nix's armored back using an obsidian drill and pry open the flesh underneath to expose the "drive chamber", which is a bundle of nerves nestled within a cavity beneath the creature's chitin plates. The drenlyn would set a few hook-like prods into the organ before resetting the plates. The process took about an hour, and would render the nix docile. Such a process was about as normal in Dunmer society as collecting eggs from a chicken coop would be in fowl-keeping societies. However, the practice was viewed as strange and inhumane by people from other provinces.[1]

After the Ebonheart Pact outlawed slavery of their Nord and Argonian allies, farmers who relied heavily on members of those races for slave labor began to employ nix-oxen in place of slaves. In particular, nix-oxen were used to plow fields. Nix-oxen have a second pair of appendages located on the sides of their head known as pedipalps, which are used by the beasts as a form of protection. Farmers forced their nix-oxen to drag these appendages through the soil to create furrows for crops such as saltrice and marshmerrow. As the years went by, a nix's pedipalps would erode from being dragged through the dirt. Not only would a creature with eroded pedipalps be useless to the farmer, but it would lose a valuable defense mechanism. Nix-oxen whose pedipalps were too eroded for the beast to work were either butchered for their carapaces or left to starve in the ashen wastes. The lack of proper pedipalps made survival for abandoned nix-oxen virtually impossible. In 2E 582, a concerned House Dunmer farmer drafted a petition in an attempt to pass a law requiring all farmers to retire their nix-oxen after a certain amount of years. The farmer believed that the practice of abandoning nix-oxen who could no longer work was inhumane, and saw such treatment as unfair considering how much of a boon nix-oxen were to Dunmeri farming communities which lacked slaves.[2] 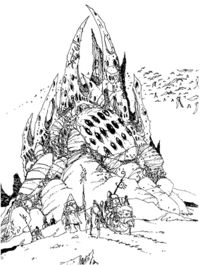 Concept art of a bug mount in the Ashlands