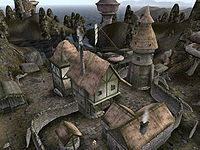 Dagon Fel is an isolated fishing village found amidst the archipelago of Sheogorad, on the island district of Vvardenfell. It is found on the province of Morrowind. The town has historically been occupied by the Nords of Skyrim, since the ancient invasion of Morrowind by the Nordic Empire. It is built atop of the ruins of a Dwemer city known as Mzuleft.[1]

Dagon Fel traces its origins to the Conquest of Morrowind in the early First Era. At this time, High King Vrage the Butcher ruled over the First Empire of the Nords, and invaded surrounding territories such as Resdaynia and High Rock.[2] But when both the Chimer and Dwemer had driven out the Nords in 1E 416, the Dwarves built their own city on Dagon Fel's ruins, known as Mzuleft. But like many other Dwemer settlements, Mzuleft was later abandoned.[1] Sometime in the mid-Second Era, there was a settlement called Dagon Fel with an active port.[3]

Thousands of years later in 3E 414, the Treaty of the Armistice was lifted on the island territory of Vvardenfell, as well as surrounding islands like Sheogorad. Nordic fishermen came to the area and re-established the town of Dagon Fel, atop of the Dwemer ruins. Because of its location, Imperial scholars and adventurers arrive in the area to explore the nearby Daedric and Dwemer ruins, of which the region is riddled.[1]