Morrowind:Mehra Milo and the Lost Prophecies 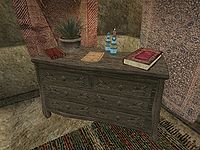 Milo's note on the dresser in her private quarters

Return to Caius Cosades in Balmora after being cured of Corprus over in Tel Fyr. Once again you are promoted, this time to Operative. Caius informs you that, for various reasons, he is being recalled to the Imperial City, which actually makes you head of the Blades in Vvardenfell. Talk to Caius about your new promotion to get some handy items as well as use of his house. His last orders to you before he leaves are to continue to investigate the lost prophecies, and to bring them to Nibani Maesa in the Urshilaku Camp once you find them. The first step is to meet Mehra Milo again in the Hall of Wisdom in Vivec's Temple Canton, and tell her what you have learned from the Urshilaku. Milo was being watched and left a message in her private quarters under the code word AMAYA.

Get to the Hall of Wisdom in Vivec to look for Milo. If you search the library, you will discover that she is no longer there. Ask the other librarians about her and they will tell you that her private quarters are opposite the Canon Offices in the Hall of Wisdom. Her quarters are locked (level 20) but by this point you should have spells, scrolls or picks to gain entry. The key can even be found behind a drape near the door. Milo is not in, but there is a Note to Amaya on the dresser. The note says that Milo is visiting the Inquisitor at the Ministry of Truth and that you should bring two Divine Intervention scrolls. She goes on to mention that the guard, Alvela Saram, will let you past if you mention you are looking for her and that she has left two levitation potions for you to use. Clearly, Milo has been imprisoned by the Ordinators and has left this coded message in the hope that you would find it.

The Ministry of Truth

The Ministry of Truth is the large meteor floating over the Temple Canton, which can only be reached using levitation. You can use a levitation potion or spell, or instead you can make an offering to the Shrine to Stop the Moon, located below the ministry. You will need to donate a potion of rising force (a bargain, cheap, standard, quality, or exclusive potion will work, but not a custom potion). In exchange for your donation, you are blessed with a powerful levitation spell (100 points for 1440 seconds). Make sure you remember the two Divine Intervention scrolls. You can buy them from Janand Maulinie in the Mages Guild in the Foreign Quarter.

Outside the top entrance to the ministry you will find the guard Alvela Saram. Talking with Alvela reveals that Milo is a prisoner and you are tasked with breaking her out. She gives you the main key and suggests to enter using the back door, which is the door furthest from Alvela. There are many locked doors inside the Ministry. They can be opened either by finding their respective keys or by lock picking them.

Once you enter the Ministry using the back door, immediately go right. Do not let anyone see you as they will attack and call the guards. The guards here are well armored and hit hard, so unless you're prepared, a stealthy approach may be best (any form of invisibility or chameleon helps). The Prison Keep is at the top of the Ministry and has only a level 20 lock guarding it. The Ministry of Truth Sector Key unlocks this door and is to the right of the upper entrance in the Grand Inquisitor's desk. Once you enter the Prison Keep, you may be attacked by a few guards, so be careful. Mehra is located in the right-most holding cell and there are a few ways to go about reaching her, none of which are any more correct than the other. You may use levitation to fly over the guards and reach Mehra’s cell. Make your way to her however you can and don't worry if you are backed into a corner and forced to fight: you will not incur a bounty for killing any of the Ordinators.

Bluffing your way through the Ministry[edit]

If you have a Temple rank of less than level 5 (Adept), or are not a Temple member at all, your disposition with the Inquisitor is at least 70 (this can be achieved with a charm spell, if necessary), and you are not of a beast race, you can bluff your way past the Grand Inquisitor and the other guards by donning an Indoril helmet, cuirass, and pauldrons, and then talking to the Grand Inquisitor and telling him that you have "proper authorization". He will give you his key and the guards will refuse to attack you.

Alternatively, if you are at least Adept rank in the Temple, or have a disposition of 100 with the guards prior to speaking to them the guards will not attack you unless you talk to them twice (they give you a "leave or die" warning the first time) or enter the prison area.

Be warned, however, that once any guard attacks you, whatever the reason, all ministry guards in the area will then attack you on sight, and once this happens, they will behave like enemies, not normal guards, that is, they will forever try to kill you unless you kill them, or temporarily stop the fight with a calm spell (and even then, they will refuse to speak to you normally). 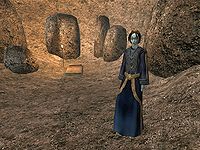 Milo in her cell

Once you find Mehra, she outlines the escape plan. You are to give her one Divine Intervention scroll for her to make her escape, and you escape the same way or another, as you like. Using the other Divine Intervention scroll teleports you Ebonheart. You are to meet each other at the secret Dissident Priests Monastery of Holamayan. You are to meet a woman on the east docks of Ebonheart (just southwest of Vivec) named Blatta Hateria. Tell Blatta that Mehra sent you and that you want to go fishing. Blatta will then bring you to Holamayan where you and Milo will meet up. Once there, you'll receive the lost prophecies from the Dissident Priests' leader Gilvas Barelo. Additionally, the entrance to Holamayan is concealed with magic. Speak to Vevrana Aryon, a monk on the dock at Holamayan about it.

You can leave the Ministry however you wish, although teleporting out via Recall or intervention is obviously the easiest way. If you use a Divine Intervention scroll as suggested, you'll end up in the middle of Ebonheart, which is rather convenient. Blatta is on the left side of the docks, and will ask if she knows you. Once you mention you want to go fishing, the option to travel to Holamayan will be added to her destination list (labeled as Azura's Coast Region). You will have to pay her for the trip. Vevrana is on the docks across from you when you arrive, and she will tell you that the magical shield guarding Holamayan opens only at dusk and dawn, meaning you will probably have to rest until the proper time. She also can arrange your trip back to Vivec when you choose. Dusk and dawn times are 6pm to 8pm and 6am to 8am, respectively. You are able to rest on the grass outside the entrance, instead of waiting. 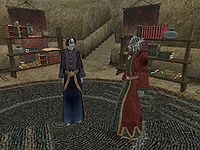 You can find Mehra with Gilvas Barelo just off to the right in the library when you enter Holamayan. Gilvas has some information on Dagoth Ur, among other things, as well as the lost prophecies that you have been looking for. You receive three notes from him relating to the prophecies: The Lost Prophecy, The Seven Curses and Kagrenac's Tools. Talking to him about Nerevar also nets you three more books. Make sure you exhaust all dialogue possibilities with Gilvas to get all the information that you can. By all accounts, you are becoming closer and closer to being the true Nerevarine. Now that Caius is gone, you have no one to report to, but don't forget that Nibani Maesa in the Urshilaku Camp wanted to speak with you again once you've found the lost prophecies.