The UESPWiki – Your source for The Elder Scrolls since 1995
< Morrowind: People / Merchants / Spellmakers
Jump to: navigation, search 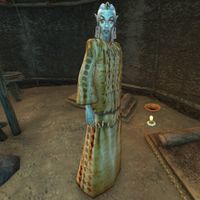 Nibani Maesa, a Dark Elf wise woman, is the Urshilaku Ashlanders' Farseer. She can be found in the Wise Woman's Yurt at the Urshilaku Camp. She is considered a leader and guardian of the Nerevarine Cult. She has also come into possession of the Valenvaryon Propylon Index, which she will be willing to sell if you have the Master Index plugin installed. She also sells basic Restoration potions and alchemical ingredients. Maesa is a vital character in the Main Quest, and is your guide throughout your fulfillment of the Nerevarine prophecies.

She wears an expensive robe and carries two cure blight disease potions with her. Aside from her natural resistance to fire and the sanctuary provided by her ancestors, she knows the following spells: Shield, Purge Magic, Divine Aid, Orc Strength, Powerwell, Quicksilver, Restore Endurance, Restore Luck, and Restore Willpower.

You are born on a certain day to uncertain parents. So you have passed the first trial. My dreams show me that you also fulfill the second trial, that 'neither blight nor age can harm him/The Curse-of-Flesh before him flies'. I have read the signs, but I cannot understand. Can you explain this to me?"

Tell how I got corprus disease and was cured

"That you have overcome the Curse-of-Flesh is strange enough, but that it should protect you from blight and age is past belief. Yet the signs of my dreams are clear. You have passed the second trial. But the third trial is unfulfilled. The mystery of the third trial is not my secret to share. Go to Sul-Matuul, the guardian of our cult, and he shall tell you of the third trial. When you have fulfilled the third trial, return to me for guidance on your next steps on the path of the Nerevarine."

Second trial
Neither blight nor age can harm him.
The Curse-of-Flesh before him flies.

Third trial
In caverns dark Azura's eye sees and makes to shine the moon and star.

Sixth trial
He honors blood of the tribe unmourned.
He eats their sin, and is reborn.

One destiny
He speaks the law for Veloth's people.
He speaks for their land, and names them great.

What does this prophecy mean? It tells us who the Nerevarine will be, and the trials he must undergo before he fulfills his destiny. Some parts I understand. Some parts I do not. I will answer your questions as best I can. But I cannot pretend to understand it all."

When earth is sundered, and skies choked black,
And sleepers serve the seven curses,
To the hearth there comes a stranger
Journeyed for 'neath moon and star.

Though stark-born to sire uncertain
His aspect marks his certain fate.
Wicked stalk him, righteous curse him.
Prophets speak, but all deny.

Many trials make manifest
The stranger's fate, the curses' bane.
Many touchstones try the stranger.
Many fall, but one remains.