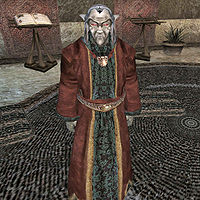 Gilvas Barelo, a Dark Elf priest, is the abbot of Holamayan Monastery and de-facto head of the Dissident Priests. He will provide you with much information after you rescue Mehra Milo from the Ministry of Truth in Vivec. He is the author of Kagrenac's Tools and The Lost Prophecy.

He wears an expensive robe with matching shoes. Aside from his natural resistance to fire and the sanctuary provided by his ancestors, he knows no spells.

I've annotated your copy of 'The Lost Prophecy' with our best efforts at interpretation. But a rough summary might be: 'An outlander -- foreign-born, but welcomed as a guest -- confronts seven curses beneath Red Mountain. His hand, blessed by Azura, uses a cursed blade to bring justice to House Dagoth, or House Dwemer, or both.' The Nerevarine? An outlander? That wouldn't please many Ashlanders, and may explain how the prophecy got lost."

Your copy of 'The Seven Curses' bears our guesses at interpreting the verses. In short form: Seven curses come from House Dagoth, or House Dwemer, or both. Fire and ash come from Red Mountain. Flesh is corprus. Ghosts, Seed, and Despair are unclear, but Curse-of-Dreams seems to refer to recent cases of soul sickness and Sleeper attacks in the towns."