The UESPWiki – Your source for The Elder Scrolls since 1995
< Lore: Alchemy
Jump to: navigation, search 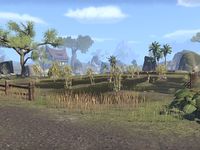 Moon Sugar is a grainy powder of small white crystals refined from cane grasses of Elsweyr's coasts and estuaries. It is similar in appearance to salt crystals albeit with a silver sheen. However, when light hits the substance it will appear to glow from within.[1] Used as a spice in Elsweyr, it has modest magical properties, and is also a potent narcotic—illegal in Third Era Morrowind and the rest of the Empire.[2] It is commonly refined into a more potent and addictive form known as Skooma. Humans, it seems, are even more susceptible to the effects of moon-sugar than the catmen themselves, and travelers to Elsweyr are thus cautioned against partaking of any of the sugar-loaded native food.[3]

Moon sugar has a variety of uses; it is alternately a seasoning and a magical ingredient, a source of communion with the holy moons and a dangerous and addictive drug.[3] It has analgesic and soporific effects; it makes users "happy and stupid."[4][5] In the case of spoiled moon sugar, it is technically edible, though it will cause illness when consumed.[6][7] In humans and Mer, the effects of its consumption are exacerbated, causing a relatively brief euphoric state followed by complete exhaustion for several days.[8][9] Khajiit are relatively resistant to these effects because they consume it in some form every day, but over consumption can cause the same euphoric state and even addiction.[10][3][11]

Khajiit take advantage of these properties to tame and train Senche-Tigers, which have a strong sweet tooth that waxes and wanes with the moons.[12] An elixir of moon sugar can be used to "allow the light of the moons into your soul" and embark on spiritual journeys.[13] Much like Senche-Tigers, Khajiit commonly have a strong sweet tooth, and in Elsweyr moon sugar is used as a spice in almost every dish.[14][3] This makes it almost dangerous for the unwarned guest, as it may cause tooth- and stomach-aches.[15]

Moon Sugar cane is native to the Tenmar Forest in southern Elsweyr, but production occurs in plantations outside of that region, including the isle of Khenarthi's Roost and Reaper's March, where it requires extensive irrigation with captured rainwater.[16] Symmetrical sugarcane gardens surround the palaces of the Mane in Torval.[3] Criminals have attempted to grow moon sugar grasses in Vvardenfell, without success.[2] Only one Khajiit was successfully growing moon sugar in Zainsipilu on the island.[17] To halt the production of it, the Ordinators of Vivec's Hall of Justice ordered adventurers to plant false information. The misinformation said that moon sugar can be grown by combining Jarrin Root (especially dark purple samples), Nirnroot, Nightshade, and lava ash, mixed in equal amounts with water and crushed into pebble sized chunks, and spreading the resulting fertilizer over the moon sugar grass.[18]

Moon sugar is illegal throughout the Third Empire but often smuggled.[4][19] In the Third Era, smuggling of moon sugar was prominent in Morrowind.[20] Dunmer occasionally used Khajiit slaves to transport moon sugar secretly.[21] Some Khajiit have also used the moon sugar trade to their own advantage, growing rich from the drugs run through the main port of Senchal.[3]

Depiction of Azurah, who is credited with introducing Moon Sugar to the Khajiit

The moon-sugar of Elsweyr is the holiest of substances to the Khajiit. They speak of sugar as others speak of the soul or the lifeforce. The Khajiit understand it to be "crystallized moonlight," caught in the water of the Topal Sea and brought to the sugarcane groves of the Tenmar by the force of the twin tides.[3] Khajiiti dogma reveres the moons as divine, furnishing life into the bodies of the Cat-Men by ingestion of moon-sugar, a sacred ingredient.[22] Thus, by partaking of the sugar, the Khajiit believe they are consuming small portions of their gods' eternal souls. This drives them into fits of ecstasy and abandon, and the streets of Elsweyr's major cities are full of catmen shivering in the grip of sugar fits.[3] The Daedric Prince Sheogorath, along with his daedra, the Aureal, are associated with corrupting the benevolence of the Khajiit's sacred Moon Sugar. The Aureal tempt mortals to over-consume the substance.[23] Sheogorath may appear when a user consumes Skooma through the protection of the Lunar Lattice.[24]

In the Khajiit creation story, Azurah was given three secrets by her mother Fadomai. After speaking the first two secrets and creating the Khajiit and binding them to the Lunar Lattice, she spoke the third secret, making the light shine down upon the marshes where they became the crystallized moonlight known as Moon-Sugar.[25]